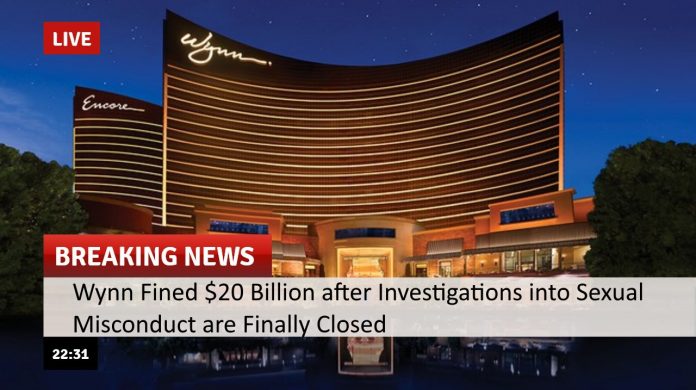 Wynn Resorts has faced a fine of $20 million this week, following a year-long investigation into sexual misconduct allegations made from several members of staff who worked for the casino giant from 2005.

Several women stepped forward to state that Mr. Wynn had at one time or another, sexually harassed, abused, and even raped one of his accusers, who became pregnant as a result. Documents also revealed that the former CEO pressured one cocktail waitress into a nonconsensual relationship between the year 2005 and 2006, which led to a $965,000 settlement to the victim and her family.

According to the company executives at Wynn Resorts, none of them admitted or denied that they were aware of any allegations into Mr. Wynn’s multiple accounts of sexual harassment at the time.

“The company’s initial response during this period was driven by Mr. Wynn’s adamant denial of all allegations,” claimed Wynn Resorts spokesman Michael Weaver in a statement. “It acknowledged a “short-sighted focus on initially defending Mr. Wynn, rather than reassuring employees of the company’s commitment to a safe and respectful work environment.”

Despite the hefty fine, which could have been a lot higher according to commissioners John Moran Jr. and Deborah Fuetsch, the Nevada Gaming Commission has allowed the casino operator to keep its gambling license. The Commission hasn’t taken any other disciplinary action against the former executives who have resigned from the company.

“Isn’t it strange that the people … that are the subject of this aren’t even in the room today?” Moran observed of the new slate of company executives and board members sitting before him. “The people that are in this room now … they’re left with the train wreck to try to fix it.”

Steve Wynn sold his shares and made the decision to stand down as CEO and board chairman over a year ago, around the time when the investigations started and things began to heat up. Details weren’t made public initially, and to this day he still denies all allegations against him.

“In sum, these 25,000 employees, led by CEO Matt Maddox and a reshaped board of directors, are the company that stands before the commission today, and not Steve Wynn,” the operators said in a written January settlement.

Going forward, it is very likely that all employees will have to undergo sexual harassment prevention training. The company said they will also look to add a women’s leadership council for boosting equality in the workplace.

At Loggerheads with Massachusetts

Steve Wynn filed his own lawsuit against the Massachusetts Gaming Commission before his resignation last year. After the sexual harassment allegations came to light in the Wall Street Journal, board members at the Commission launched their own investigation, and wanted to determine whether Wynn Resorts was a suitable candidate for homing a gaming license in the state. They had been eyeing a spot in the Boston area for a $2 billion waterfront casino resort to open in June.

Wynn attempted to sue over the release of a report from the commission which contained confidential information “protected by attorney-client privilege.” A Nevada judge is said to have temporarily blocked the report from being publicized until a hearing takes place on Monday next week.

Former shareholders are said to have seen their own stock value plummet dramatically after the accusations were kept concealed by company officials. According to records, Wynn Resorts traded over $200 per share before the original report surfaced in the Wall Street Journal. When Steve Wynn resigned, shares were at $165 per share, and company stock closed entirely at $130.42 on Tuesday this week – up $1.25.

Jennifer Roberts, associate director of the International Center for Gaming Regulation at the University of Nevada, Las Vegas, said the Nevada penalty “sets an unfortunate benchmark, but a necessary one for the industry and Wynn Resorts as a company,”

“It will be interesting to see how this affects what Massachusetts is going to do,” she concluded.