Two professors at the University of Waterloo began a research project jackpot on slot machines. They started by studying the people who played them. The researchers found the slots games fool people into thinking they are winning, even when they are losing a game. For example, the researchers found many slot machines had flashing lights and musical celebrations. These lights would flash and the music would activate if a person had a close call or a near miss. They would also activate if a person won a small jackpot.

All these techniques made players think they were winning more money than they were losing— which wasn’t the case. The researchers found players reacted to a near-miss almost as they would if they had won a real game. The players’ overestimation on how much they won didn’t end until they were finished playing. Also, players seemed to think that near misses got them closer to winning, when, in fact, each spin operates independently.

After their initial research, the professors decided to play warning labels on the slot machines. They wanted to see if people would stop and think about what they were doing before they began to gamble. The warning labels, which look like food labels, told players about the history of the game. They told players the game made either frequent, small payouts or larger payouts that occur less often. The labels also noted how often a player could hit the bonus round. Finally, the labels warned players about the payback percentage of the game. This is the percentage of all the bets by players that go to the casino. 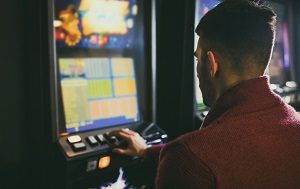 In their interviews of gamers, the researchers discovered two interesting things. First, the players were well aware of the risks and odds associated with slots. They had seen the warning labels but continued to gamble anyway. The players stated they thought they were going to hit the next big jackpot. Therefore, the “rules” and the odds of the slot didn’t apply to them. Second, some people were so focused on gambling that they were not aware of the labels. The researchers had placed the stickers in plain sight.

The professors also found results for a fraction of the gambling population who they considered to be problem gamblers. These people continued to gamble on the machines because they truly believed they could beat the odds. These gamblers continued to play even in the face of overwhelming odds. The researchers noted, for these gamers, no amount of talking or showing the odds distracted them from gambling.

For these gamblers, the statistical reality was no match for the belief they could win if they played long enough. The research also indicated the stickers did help players understand how the slot machines work and what the odds are. The decision on whether to continue to play, then, is the player’s decision alone.