For many years, the Toronto waterfront was the place to go. The shores of Lake Ontario were home to shops and restaurants, and tourists flocked to the area. However, the economic crises of the late 1960s and 1970s, caused the waterfront to deteriorate. It became a home for crime and drugs.

However, as part of a 21st-century revitalization, the waterfront is undergoing a major redesign. And, part of the revitalization could be gambling.

The History of the Waterfront 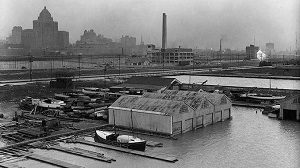 Toronto has been a commercial center since the French explored the area in the 1750s and established a fur trade center. Because of Lake Ontario, the area quickly became a shipping center and a harbor. Commerce increased during the 1800s, and the harbor became a central feature of the Toronto Business District. Ships ran people between Buffalo, N.Y., and Toronto. The heyday of the waterfront was during and immediately after World War II. After that, the harbor gradually started to decline. The ferries between Toronto and other areas around Ontario and New York stopped running.

There had been some talk of revitalizing the waterfront since the 1980s. But, it has only been in the last five years that there has been any real progress. The idea of revitalization has been hindered by the closure of the amusement park that used to sit on the waterfront. However, parts of the waterfront have become beachfront parks.

The Plans for the Waterfront

Doug Ford, the province premier for Ontario, once served as a city councilor in Toronto. Ford has backed a revitalization plan for the area, which includes a complete redevelopment of the former amusement park. Ontario Place, the abandoned amusement park, contains acres of land that the City of Toronto could build on. It would be the perfect location for a waterfront casino, resort hotel, and entertainment complex.

The initial plans call for a large casino, with gaming tables, slot machines, a convention center, shopping, and restaurants. There is also room for a theater complex. Additional plans have also called for a monorail, a Ferris wheel, and a boardwalk. The hope is that the building of the casino will spark additional development in the area. The city hopes it would be like the MGM National Harbor in Maryland, which includes hotels, restaurants, shopping, and housing. The National Harbor development should bring in hundreds of millions of dollars for the local economy. And, it is not too far from Washington, D.C.

The potential for the attraction of tourism and money into the area is huge. Currently, Toronto does not have a large casino, although it does have some gaming and bingo halls. The largest casino in the country is in Montreal, even though Toronto is twice its size.

The Potential Problems with Riverfront Development

However, before the development can get underway, it will have to overcome several hurdles. The premier and provincial leaders are all in favor of the redevelopment. But, the mayor of Toronto is not. The city council, which has heard the idea of casino development along the waterfront, voted against it in 2013. The city council has not been in favor of any redevelopment that involves a casino. Its reason is simple. There is the potential for crime. The council said the city needs to address the issues it is facing. It also said the province would have to strike a deal with the three casinos currently operating in the Toronto area. They must have some say in a new casino development. However, the city needs a revitalized harbor. The only question is how to go about it.