The gambling revenues in Macau have been on the upswing in the last few months. The Macau casino industry also appears to be putting the scandals and the corruption schemes to the side. However, the casinos in Macau were bracing for a down month this year, because the area was hit by two strong typhoons during the month of August. While the storms exposed the city’s problems with emergency management, revenues rose again in August, showing a 20.4% improvement from August of 2017.

Macau is the largest gambling market in the world, generating nearly $33 billion dollars in revenue in 2017.  The figures eclipse other gambling markets like Las Vegas, which did $7 billion in the same time period. The area of Macau is home to 38 casinos  and caters to high rollers who account for about 60% of casino revenue. However, the industry in Macau has been plagued in the last two years with corruption and money laundering scandals.  Macau’s reputation has become so troublesome that the Chinese government has banned its officials from entertaining clients in its casinos. However, recently, the area’s casinos have been on the upswing, showing months of growth within the last year. 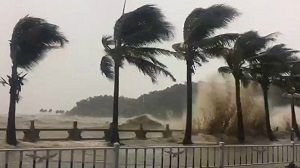 One of two storms, Typhoon Hato, hit the area on August 23, killing 10 people and injuring 244 others. The storm cut power and water to the casinos, leading to charges that the government was not prepared for a disaster. In fact, many gamers and casino workers believe that storm warnings were delayed in order to increase the casinos’ revenues. Had the warnings been relayed earlier, the casinos would have closed, and the staff would have been owed special compensation by law. However, the storm blew in and stranded both customers and workers within the casinos for days.

The damage was so extensive that Macau sought cleanup assistance from the Chinese military. This was a first for the area, a significant representation of how severe the damage was. Streets were flooded and filled with debris which resulted in displaced  casino workers assisting with cleanup.

The Earnings at the Casinos

Gross gaming revenues were down slightly from July at 1.1%, which financial experts attribute to the storms, especially Hato. However, the $2.75 billion earnings were nearly 21% more than August of 2017, when the casinos were experiencing a down period. Economic forecasts for Macau remain mixed, as some economists believe that the region will regain players they’ve lost in recent years. Other analysts predict that the industry is losing high-rollers to Australia and other countries in the region.

Galaxy Entertainment Group posted a half-year result of 81.5% in net profit totaling $593 million. This dollar amount represents an impressive 12% rise in revenue over 2017. The company said the increase in profit was attributable to the house’s higher-than-normal winning percentage on gambling wagers. MGM China posted a 3.3% rise in revenue, but a profit decline of 2.3%. Wynn Macau and Melco Resorts reported slight revenue increases of 2%.  However, SJM Holdings reported a steep decline in profit and revenue, and their share of the gaming market also declined to 16% from 20% in 2017.

To continue to improve on its numbers, Macau will have to recover from the effects of Typhoon Hato. These efforts may take a little more time than anticipated, as some of the casinos suffered significant water and wind damage. However, the casinos are expected to be up and running as quickly as possible.