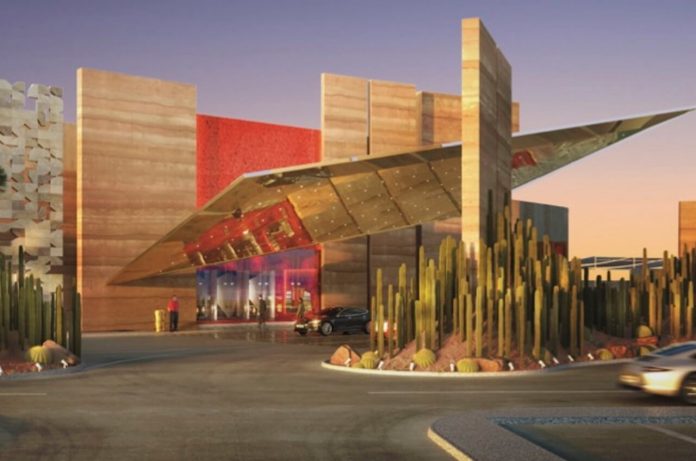 The iconic Hard Rock guitar will flash and twinkle no more in Las Vegas; Virgin’s coming to town. During the 8-month renovation process, the new owners have decided to shut down the hotel temporarily. Hard Rock will officially close following the 2020 Super Bowl (February 2), and Virgin Hotels Las Vegas will open in late 2020.

In 2006 the Morgans Hotel group purchased the hotel and the use of the Hard Rock brand name in the Western U.S. Hard Rock International, owned by the Seminole Tribe of Florida, operates the global café and hotel franchises. When Virgin Hotels bought the property in 2018, it planned to merge the brands into one, with a total renovation estimated at $200 million.

Some hotels remain partially open during renovations in order to continue doing business seamlessly. However, resort leaders decided against the phased approach in favor of total closure during renovation. JC Hospitality CEO Richard Bozworth told ABC, “We determined that a phased closing of four months, followed by a total closure of four months was not efficient from a construction process nor could we provide a hospitality service experience our guests deserve.” 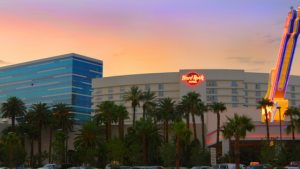 Sir Richard Branson has his hands in nearly everything. His Virgin Group has stamped its brand name on records, books, mobile, sports, holidays, airplanes, and space travel, and more. That’s right: space travel. Virgin Galactic aims to make travel affordable for everyone. So far, only a handful of celebrities have pre-paid the $250,000 ticket price—and no commercial flights yet.

Branson says the inspiration for the company name was ‘virgins in the business world’ in the 70s. But the name stuck, and the Virgin logo’s V was designed to look like an ‘enthusiastic check mark’ according to Branson. And after having his fingers in almost every planetary pie, the Virgin group seems to have ticked a lot of boxes before stalling out in space. But from space exploration, there was only one possible remaining investment: casinos. It’s a real down-to-earth investment. Bezos or Musk will get us into space, we promise.

Virgin’s experience in the music and entertainment industry dovetails nicely with Hard Rock’s brand image of fun, feasting, and rock and roll. During the closure, the Virgin group assures Hard Rock employees that they will have a place to work when the resort reopens.

What a guy, that Branson. It’s awfully generous that he is offering the displaced Hard Rock workers job security after an 8-month closure. But as he is not American, he doesn’t realize that most Americans live paycheck to paycheck, and many of them are 2 paychecks away from homelessness. Yup, it’s Trump Country, Sir Richard, and you’ll be lucky if those Hard Rock employees are still alive after 8 months.

CEO Richard Bosworth said he wants to see the employees return, saying “Those employees will all be recalled,” Boz said. “The ownership group is paying for them to return, and we want them to return.”

Sorry: they won’t return. Unless you plan to pay their rents and feed their chilluns, those casino employees will jump ship faster than rats leaving a sinking ship. Casinos live in Fortune 500 Land, a place where billion-dollar businesses are bought, sold, re-bought, re-sold, and merged until you can’t possibly recognize (or punish) the owners for anything. Employees are just pawns on the board.

Fortunately, there’s always a new casino expansion going on in Vegas, ensuring job security for all dealers, cooks, hotel staff, and the thousands of other people who keep your hospitality service on the rails. Here’s an idea: earn your American Knighthood, Sir Branson, by paying all those displaced casino employees’ full wages for 8 months. Hell, you can afford it.

Since Yanks are lucky to get 2 weeks of paid vacation per year, while European citizens get 4-6 weeks, you can just retroactively pay your new loyal staff 8 months of holiday pay. We don’t crown or knight people in the U.S., but you will certainly be a candidate for the Rock and Roll Hall of Fame. One inductee, The Who bassist John Entwistle, died in the Hard Rock Hotel Las Vegas. Honor him by letting everyone meet the new boss.

And don’t be the same as the old boss.