Recently, four additional people have been charged with money laundering and gambling charges in Houston’s Chinatown. The charges have come as part of an investigation that is ongoing.

Kim Ogg, the Harris County District Attorney, announced that five individuals, including a Houston police officer, were arrested on charges of gambling and money laundering. The investigation is being conducted by the Houston Police Department and the district attorney’s office.

The Houston Police Department also held a news conference recently to talk about the department’s two-year plan to reduce crime in southwest Houston. During the press conference, authorities confirmed that police officer Thomas Lam was among the people arrested in the illegal gambling ring.

Lam’s Involvement in the Gambling Racket

According to the DA’s office, Officer Lam has been charged with protecting the operator of Café Thanh Quynh. The café was an illegal gambling site located at Bellaire Blvd in Chinatown. The facility has a number of secret rooms, where gamblers bet money by playing the machines. Kai Bang gang members frequent the café as well. The game rooms are often sites of high crime in the city. Since there is lots of cash in the rooms, they are robbery targets, which often leads to violence.

Ogg states that there is evidence that office Lam played regularly at the café. Lam was also seen at the establishment wearing his uniform, both off and on duty. The DA also confirmed that Lam served as security for the game rooms and determined who could enter the café to gamble. The DA stated that Lam was a “prolific gambler” who “gambled away his career.”

Besides officer Lam, civilians  were also arrested, including the alleged café owner. One of the managers of the café was arrested, along with game room workers who made cash payouts to gamblers. The clerks working at the facility were charged as well. Authorities have stated that these and other illegal activities in Chinatown have impacted the community negatively. Violent crimes and robberies have increased as a result.

The entire operation has resulted in 41 total arrests so far, including three Houston police officer. More than $2.4 million has been seized in cash. 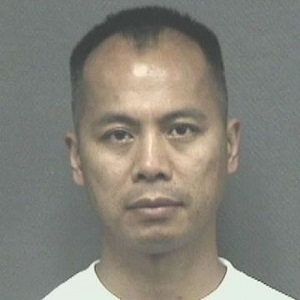 Lam has been an officer with the Houston Police Department for over ten years, according to police chief Art Acevedo. Lam’s arrest comes seven months after officials announced their commitment to reducing crime in Chinatown; the other two police officers were arrested during that time.

Acevedo asserts that the police officers involved in the gambling ring have “violated the public’s trust, and there’s no room for that.” Acevedo also stated that Lam was a “disgrace to the badge…to the uniform.”

Authorities discovered that the money came from a safe belonging to one of the men arrested. A total of five gaming centers, located primarily in Bellaire Boulevard shopping centers, were involved in the gambling ring. Ogg asserted that the gaming rooms had between 25 and 60 gambling machines, which are known as eight-liners.

The DA also clarified that the gaming rooms are not illegal in and of themselves. However, the gambling became illegal when the game room owners started to pay winners past the legal limit. All the game rooms involved in the investigation have been shut down, except one.

There is also evidence that two police officers, Huy Ly and Larry Nguyen used funds from gambling to finance large purchases such as a Lamborghini and Lexus, as well as other luxury items. The officers are charged not only because these actions are illegal, but because they were on the police force at the time of the purchases.