Idaho has been debating for months about whether or not to allow historical horse racing machines. The measure to allow historical horse racing to become legal was voted down by citizens of the state. However, the fight might not be over. First, a determination needs to be made, are instant racing video games illegal—or not? The attorney general has weighed in, but he is facing opposition on whether or not the machines are indeed illegal.

Idaho does have Indian casinos, which are legal in all the states under US law. The state currently has seven Indian casinos located on reservations throughout the state. Idaho also has horseracing. There are three race tracks in the state, and horse racing is conducted at several fairgrounds in Idaho. However, as opposed to the number of race days in places like Santa Anita and Louisiana Downs, the number of racing days in Idaho is very short. In general, many of the race tracks are only available for a handful of days every year. Pari-mutuel betting is allowed at Idaho tracks.

What is Historical Horse Racing? 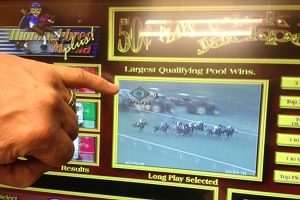 Historical horse racing machines look very much like slot machines. Gamblers look at races that have already occurred and place bets on which horse will win the race. Just like an actual horserace, the wagerer can decide which horse will win, or he can vote for horses to place and show as well. The player has no idea where or when the race took place, because all distinguishing characteristics of the race have been removed. Players are able to see a skill chart on horses before they bet.

The Ballot Initiative, Defeat and Retrenching

However, the attorney general has issued an opinion that if the historical horse racing machines are allowed to operate, the state will face legal challenges, because it is his opinion that the machines operate more like slot machines rather than pari-mutuel betting machines. Bar owners, who would like to have the machines in their establishments, have said they are willing to challenge the attorney general’s notion that the machines are illegal in court. They point out that several states have agreed that historical horse racing machines are a form of pari-mutuel betting and allowed them to operate. It appears that no matter which side the public in Idaho Falls on, the measure is headed to court.