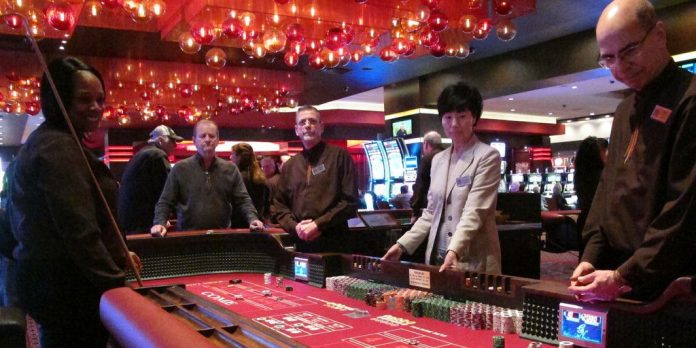 During a special extended session, officials sat down to discuss the $40.1 billion Senate Bill 690 which will see the introduction of sports betting, 6 potential casinos, and slot machines installed at some of the state’s race tracks.

The plan was originally submitted close to a decade ago; however, former Senate President, John Cullerton pushed it through a parliamentary procedure which caused major delays and for it to never receive government approval.

But, after Blue Island Democrat Robert Rita took to reviving the proposal and outlined its infrastructure in more detail, the votes fell into his favor at 87-27 on Sunday afternoon.

Lawmakers said how the revenues (which has been estimated to generate close to $500 million per annum) will be used to improve the state’s prisons and university buildings, alongside Illinois’s transport system, schools, roads, bridges and other projects.

Revenues generated by the new casino to be constructed in Chicago will be put towards their fire fighters and police pension funds.

“Sources for funding vertical (projects) were dried up and sucked up by our need to fund our day-to-day operations,” said Rep. Margo McDermed, a Republican from Mokena who voted for the bill to go through. “Many of our state buildings are in a state of poor repair and need to be renovated.”

The biggest chunk of revenue is expected to come from license fees and the taxes placed on operators and sports betting providers. Licenses could allegedly range from between $3.2 million to $10 million for actual casinos, while race tracks and arenas which want to offer sports betting could be faced with costs up to $20 million for potential operators, while every slot machine or gambling seat is likely to cost between $17,500 and $30,000 each.

Taxes would also be increased on video gambling terminals from 30% to 34% within the next 2 years.

Democratic Gov. J.B Pritzker is said to be excited at signing off the bill and seeing it come into play, citing how it was “one of the most ambitious and consequential legislative sessions in this state’s history.”

“We worked hard in a bipartisan fashion to pass a budget and to get a massive, important infrastructure bill passed,” Pritzker said to press.

Illinois currently has the lowest credit ratings compared to other states, and has a backlog of unpaid debts equating to approximately $6.3 billion. Most of these debts are said to have arisen from structural budget deficits as well as a whopping $133.5 billion in unfunded pension liability.

Pritzker attempted to implement a plan which would reduce fiscal 2020 pension contributions in April, but after an unexpected surge in revenue – the plan was soon dropped.

The new budget includes the $8.37 billion pension payment which lawmakers say is now more balanced, yet last month a vote was made in the legislative session which would see a constitutional amendment made on the 2020 ballot; asking voters to welcome a personal income tax rate which would replace the current flat tax rate.

Pritzker is hopeful this will raise around $3.4 billion per annum to address any fiscal downfalls.

“Legalizing sports betting and expanding gaming will create jobs up and down the state, from Rockford to Chicago to Walker’s Bluff, where communities hungry for employment will see 10,000 new jobs. After the Supreme Court legalized sports betting, I promised the people of Illinois that sports wagering would be a key element of my legislative agenda, so that we are competitive with our neighboring states and can create more revenue for communities around Illinois.” said Pritzker.