Rockford, Ill., is a town with about 150,000 residents along the Rock River. It is halfway between the Mississippi River and Lake Michigan and many consider it to be a suburb of Chicago. However, Rockford has an advantage over Chicago. Businesses in Rockford can have gambling machines in their establishments. Chicago businesses, on the other hand, cannot. However, Rockford’s city fathers are concerned they aren’t receiving enough money for their permits.

A look back at Illinois shows it was a pioneer in the gambling industry. In 1974, it became the first state in the nation to legalize state lotteries. This included the ability to sell tickets online earlier than nearly any other state. Proceeds from the lottery go into the state’s education fund, which averages $700 million yearly. Illinois has also allowed veterans and other service organizations to have charitable gambling. Riverboat gambling in Illinois began in 1991. And, in 2009, Illinois passed the Video Gaming Act. The law allows bars, restaurants, truck stops, and other clubs to have video gaming terminals or VGTs. Depending on the terminal, VGTs usually allow people to play slots or poker.

The Profits from Gambling in Illinois

Ten years ago, Illinois said video gambling machines would bring in $300 million each year. In fact, the state sold bonds ahead of the VGT expansion. However, instead of making $3 billion in a decade, it has only realized $1.5 billion in revenue. This figure represents a $1.2 billion shortfall as businesses head into the latter stages of the fiscal year. In Illinois, 5 percent of the revenue from VGTs goes to the city. Twenty-five percent goes to the state and the remaining 70 percent goes to the distributors and businesses.

What Does Rockford Want? 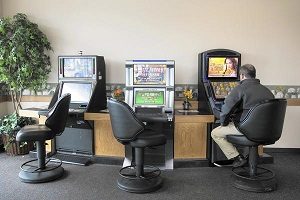 Rockford statutes allow for five machines at each business that has applied for a license. Currently, the law allows the town to charge businesses $25 per year per machine. At $125 maximum per year, this doesn’t seem like much to some of the city fathers. Rockford currently has 449 VGTs in 94 different businesses. At the moment, the most the city can collect is a little more than $11,000 each year.

To be able to charge more for its machines, the city of Rockford would have to reinstate home rule. Home rule means the city decides for itself the rules regarding accounting and finance. In general, small towns in Illinois don’t have home rules. They want the state to keep track of their money. Rockford is currently the largest city in Illinois that doesn’t have home rule. The city had a plan to reinstate home rule on the 2018 ballot, but it was defeated. Home rule allows cities to charge whatever amount they want for video gaming terminals. For example, cities, such as Springfield and Peoria, charge $500 for each machine. It’s easy to see why Rockford might want to adopt home rule. If the city could raise the fees, it could collect as much as $113,000. It can do this if it raises the fees to $250 per year.

There’s a bill in the works that will allow Rockford to begin to charge more money in yearly fees. It’s a bill being proposed by the city council and state representatives. The city is hoping that with a fee increase, it will be able to funnel more money into community services. Rockford hopes to revitalize areas of its downtown with the additional funds. The city wants to make the area more attractive to businesses. The city council is hoping the Illinois General Assembly can help it do what the voters would not.