A casino in Iowa paid a hefty fine for allowing an underage gambler into its casino to gamble. The female gambler managed to lose money in the casino. However, she did not lose as much money as the $20,000 fine the casino paid for allowing her to play. The Grand Falls Casino and Golf Resort in Larchwood received the fine at the monthly meeting of the Iowa Racing and Gaming Commission. 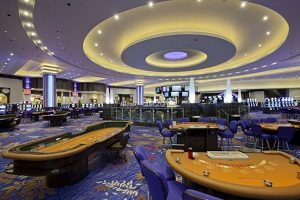 is very close to Sioux Falls, S.D. The casino resort sits on a championship 18-hole golf course. There are 100 rooms in the resort, with large suites available. The casino has slots and table games, such as blackjack, poker, craps, and roulette. Grand Falls also has 23 table games and 900 slot machines available. In addition, the casino offers tournaments and monthly contests.

The Grand Falls Casino got kudos from the Iowa Racing and Gaming Commission because it reported the violation. Earlier this year, an underage female was in the casino and gambled for five hours. She was there with two adult friends who were over 21, which is the legal age for gambling in Iowa. The casino did not check their identification when they entered. The group went into the casino, gambled for a few hours, and, then, left. When the group returned, the casino checked their IDs. At that time, the security did not allow the underage customer back in. In an interview with security, she revealed she had gambled earlier in the day.

Grand Falls Casino had not had an underage violation in four years. The commission considered the time that had passed since its last violation when deciding on the penalty. A fine of $20,000 will ensure the casino notices potential problems in the future.

This is not the first time this casino has had a problem. In October 2017, police arrested 11 people on drug charges at a Cheech and Chong concert. Authorities charged some of them with possession. Others received charges of distribution. At least one person had an outstanding warrant. Police officers were at the casino at the time to provide security. There had been an increase in the number of calls to the casino during the fall of 2017. People reported cars being broken into and property being stolen. There was also a fight in the parking lot. However, since the increased police presence and the drug arrests, the casino had been peaceful.

The commissioners pointed out that Grand Falls has had an excellent track record for reporting possible violations to the commission. This is important because failure to report a violation could result in an even heftier fine. The casino could also lose its gaming license. Grand Falls Casino said that the infraction was a misstep by its security staff. Its staff members have undergone additional training to make sure they ask adults for identification when they enter the casino. The Grand Falls Casino has also discussed the possibility of hiring additional security. This would ensure that the casino entrance always has security staff available day and night.