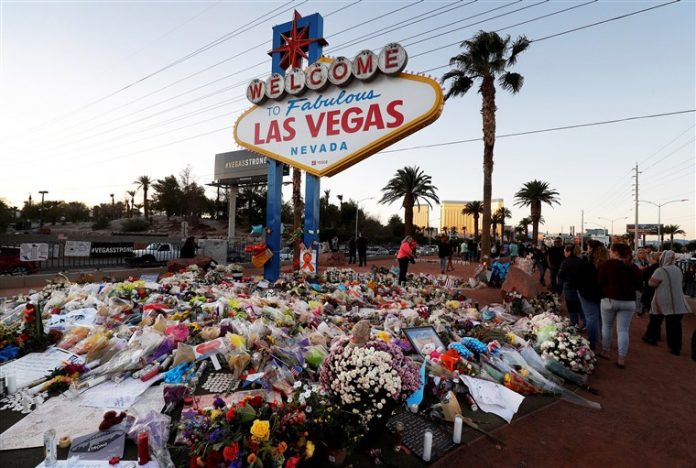 Las Vegas turned out the lights last night on the famous Las Vegas Strip in memorial for the victims of Route 91 Harvest music festival as the city and the nation marked the one-year anniversary of the deadliest mass shooting event carried out by a single individual in the United States.

On October 1, 2017, 64-year-old Stephen Paddock, a former real estate agent and auditor from Mesquite, Nevada, some 80 miles northeast of Las Vegas, drove to the Mandalay Bay hotel on the Las Vegas Strip, overlooking the concert grounds across the street and rented a room on the 32nd floor.

In a senseless attack that killed 58 people and left 851 injured, he opened fire from his hotel room on people attending the Route 51 Harvest country music festival between 10:05 and 10:15 pm, shooting off over 1,000 rounds before taking his own life.

In memorial for one of the most tragic mass shooting events in American history, all the marquees on the Las Vegas Strip, as well as the famous “Welcome to Fabulous Vegas” sign went dark at 10:01 pm.

Crowds came out to mourn and heal 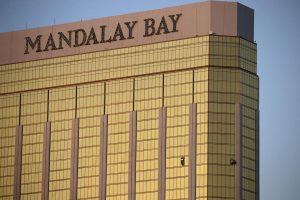 According to the Las Vegas Review-Journal, crowds lined the streets as well as the glass of the pedestrian bridge that connects the shops on Miracle Mile to The Cosmopolitan of Las Vegas waiting for the lights to go out.

Many people held up mobile phones to the glass or took panorama shots of the darkened Strip.

Earlier in the day, the Strip’s marquee displayed images of the Strip itself together with the words “One Year Braver; One Year Closer; One Year Kinder; One Year Prouder; One Year Stronger. #VegasStronger.” The words will remain on display on Las Vegas marquees until October 2nd.

Sunset was marked by the dedication of a new remembrance wall in the Las Vegas Community Healing Garden, a space designed and built by a group of volunteers, to honor the 58 people killed in the mass slaughter.

One inscription on the wall’s five panels reads, “Once again, a senseless act of violence shattered a community’s heart. This time, we as a community pushed back with a very deliberate act of compassion.”

The ceremony, which attracted large crowds hoping to pay their respects to the dead, was also attended by the Las Vegas mayor, Nevada Governor Brian Sandoval, Las Vegas City Attorney Brad Jerbic and former U.S. House of Representatives member for the state of Nevada Gabrielle Giffords.

Giffords herself has been the victim of a brutal gun assault, in which Jared Lee Loughner, killed six and wounded 18 others, including shooting Giffords in the head, in a supermarket parking lot during a campaign stop in 2011.

Giffords, long a strong gun control advocate, has made a solid recovery. Loughner was sentenced to seven consecutive life sentences without the possibility of parole plus an additional 140 in prison.

As part of the memorial celebrations, the Las Vegas Review-Journal published a front-page story titled “91 Points of Light, In Las Vegas darkest hour, humanity shone brightly”, highlighting the individual acts of selflessness and heroism that transpired amid the horrific attack.

The article celebrates the courage of everyone from police officer Greg White, who was able to use the knife in his pocket to cut a hole in the fence surrounding the concert, allowing over 400 people to escape as the shooting continued, to bus drivers who ferried victims to hospital, off duty British soldiers on holiday who sprung into action as the gun shots rang out, to individuals who used their own bodies to shield victims, as well as the ordinary people of Las Vegas who within hours of hearing of the attack formed long lines, waiting hours to donate blood.

Other Nights the Lights Went Out on the Vegas Strip

The tradition of dimming the lights on the Vegas Strip is not a new one. Before the October 1 memorial of the tragic Las Vegas shooting, the community and casinos along the Las Vegas Strip have historically dimmed the lights in honor of Las Vegas ‘royalty’ who have passed away.

The Las Vegas Strip boasts one of the most awesome spectacles of lighting in the world. Its flashing casino marquees and neon beacons beckon gamblers from around the world to visit fabulous Las Vegas. The dimming of the Strip is the ultimate Las Vegas tribute, usually reserved for major headliners in Vegas, thus contributing to the overall image of Las Vegas as the ultimate show town. 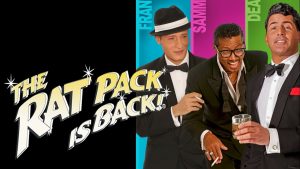 The famous group of swinging, crooning, jesting party cats known as the Rat Pack are legends in Las Vegas lore. Frank Sinatra, Dean Martin, and Sammy Davis Jr. made up the Rat Pack, and their Las Vegas appearances spelled unprecedented casino fortunes whenever they were in town. The Strip lights were dimmed on May 15, 1998 in honor of Frank Sinatra, the day after his death. On December 28, 1995, the Strip went dark three days after the death of Dean Martin. The first member of the Rat Pack to pass away was Sammy Davis Jr. The Strip went dark on the evening of his death on May 16, 1990. 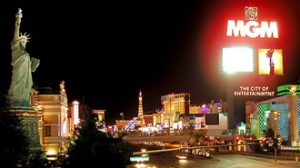 The Strip also dimmed for three minutes on June 11, 2004, in memory of President Ronald Reagan. Long before Reagan’s term as president, he was an actor and Vegas headliner in 1954 for a show called The Last Frontier. The only other president honored with a Strip dimming was President John F. Kennedy, who was assassinated November 22, 1963. Las Vegas lights dimmed in remembrance.

Don Rickles was a legendary comedian whose sharp tongue lashed out with witty insults to anyone who caught his attention. He was a regular Vegas headliner for years, and Johnny Carson nicknamed him “Mr. Warmth.” When Don Rickles died on April 6, 2017 at age 90, the Strip lights dimmed in fitting tribute to Rickles. His face flashed all over Las Vegas screens and marquees. Another legendary comedian honored by a Strip dimming was George Burns, who died on March 9, 1996 at the ripe old age of 100.

The Strip has also gone dark on December 1 for several years in remembrance of World Aids Day. The longest period the lights have been dimmed on the Las Vegas Strip is 60 minutes. Since 2009, on the last Saturday in March, the Strip has gone dark for Earth Hour to raise awareness of climate change. Imagine the massive scale of the lights on the Las Vegas Strip; over four miles of dense Strip lighting, suddenly gone dark for one hour.

Three days after 9/11, several Las Vegas casinos dimmed their lights all night long in memorial of the tragic event. The Flamingo, Bally’s, Caesar’s Palace, Paris Las Vegas, and the Las Vegas Hilton participated in the dimming of lights. Other casinos joined in the memorial event by suspending all casino play for an entire minute.