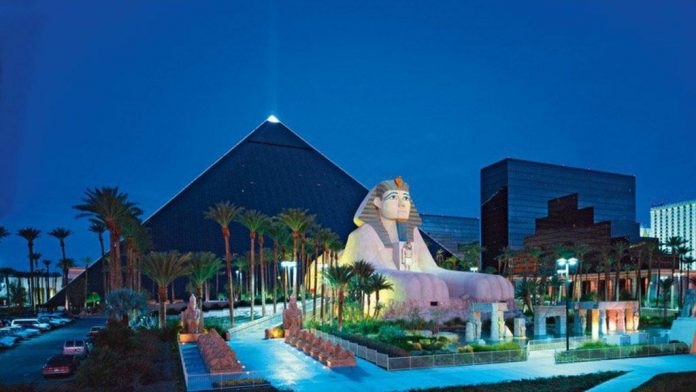 The mighty glass pyramid gleams in the desert sun and shoots a powerful beam into the night sky. But rumors are spreading that the Luxor Las Vegas might be slated for demolition.

Every skyline has its icons; some are more singular and unusual than others. The former twin towers in NYC, the Eiffel Tower in Paris, or the strange glass pyramid on the desert skyline of Las Vegas: Luxor.

The Luxor opened in 1993 to much fanfare, and was a miracle of modern engineering in its day. A giant sphinx guards the massive pyramid casino resort, and special elevators called ‘inclinators’ ferry guests at steep 39-degree angles up the sloping structure.

When it opened, the Luxor was the tallest building on the Strip at 30 stories, and it is still the first part of the Vegas skyline seen from a plane descending into the Vegas airport. And at night, the brightest beam of light on earth shoots from the apex of the pyramid into the night sky, where it can be seen from space.

According to local expert and founder of Vital Vegas, Scott Roeben, the demolition discussions have been on the table at MGM for some time.

“Our sources say company officials have discussed demolition of both Luxor and Excalibur for at least five years, but have been unable to proceed due to union contracts. It’s possible the COVID-19 shutdown has paved the way for what’s to come for Luxor,” Roeben said.

MGM Resorts also owns another family-friendly casino resort in Vegas, the Excalibur. But the Camelot and pharaoh themes are becoming a bit dated as Vegas moves away from family themes to adults-only casinos.

Rumors of the Luxor demolition are not confirmed, but the town can read the hieroglyphics on the wall: nothing lasts forever in Vegas except the gambling. Demolition is more expensive than simply rebranding, but it’s hard to rebrand a pyramid-shaped building.

The Luxor has had its bizarre accidents and mysteries over the years, enough to warrant a spot on a haunted Vegas tour. Ancient Egyptian curses notwithstanding, the property has been getting bad reviews as its shoddy condition is beginning to show.

While it is uncertain whether or not the Luxor will go the way of the ancient pharaohs, one thing is clear: if the mighty pyramid does have a date with dynamite, nothing will be left sitting around in the desert for eons waiting for new visitors.