In the on-going feud in the state of Maine over tribal gaming, the Maine Supreme Judicial has declined to take up the issue of tribal casinos in the state. While tribal casinos are legal across the country due to federal law, Maine remains an exception because of a settlement agreement between tribes in Maine, the federal government and the Maine state government. Tribes within the state of Maine have been agitating for the right to have casino gaming for over a decade.

The Penobscot Tribe has been in both Maine and Canada for thousands of years. It represents Maine’s only recognized Native American tribe. The Penobscot had contact with fur traders from France beginning in the 17th century. The tribe is part of a larger group of tribes that have the same language family, the Algonquians. At the time of first European contact, it has been estimated that the Penobscot tribe numbered over 10,000 people, but wars, alcoholism and disease reduced the number to below 500. The tribe now numbers around 700. The Penobscot began agitating for land they believed stolen from them back in the 1800s. Two other very small tribes, the Houlton and the Passamaquoddy also live in the state.

The Agreement and Gambling in Maine 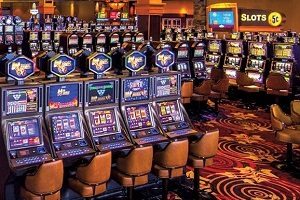 In the late 1970s, the tribal fight for land began to gain steam. The Penobscot with help from their legislative leaders in the House and Senate passed the Maine Indians Claims Settlement Act. The act provided over $80 million for the three tribes to purchase land to get reservation land. In return, the tribes had to agree to several conditions. One of the conditions was that they would relinquish all claim to lands in the state. The second condition was that all three tribes were forbidden from opening future tribal casinos in the state.

In the years since the MICS agreement, the amount of money spent on gambling in Maine has greatly increased. The state allows pari-mutuel betting on horseracing at two racetracks in the state. The racetracks also have slot machines. In addition, Maine has four off-track horse betting parlors across the state. Casinos are also allowed in Maine as well. The casinos alone rake in $132 million per year.

The tribes in Maine are allowed to have high-stakes bingo games under the laws of charitable gaming. The tribes as well as other charities in the state have the right to offer bingo games in bingo halls for prizes. However, the tribe has stated that because of the sheer amount of gambling revenue that is generated in the state, all three tribes in Maine should be able to conduct gambling on their land, just as other tribes in other states can. It has been the state of Maine’s position that the tribes knew the tenets of the agreement when they agitated for money to buy land. The state has maintained the tribes no longer have a claim, because they agreed to the act.

The Penobscot tribe, the largest of the tribes in Maine, has sued the state for the right to have gambling on tribal land. The argument for the suit by the tribe has been that the Indian Gaming Act was passed after the Maine tribes agreed to a land agreement. The tribes are asking for the same rights as other tribes nationwide. So far however the courts in Maine are not receptive to the idea that tribes in Maine should be allowed to have gambling. The latest decision means that the tribe, if they choose to appeal, will have to take their appeal to the federal court system.