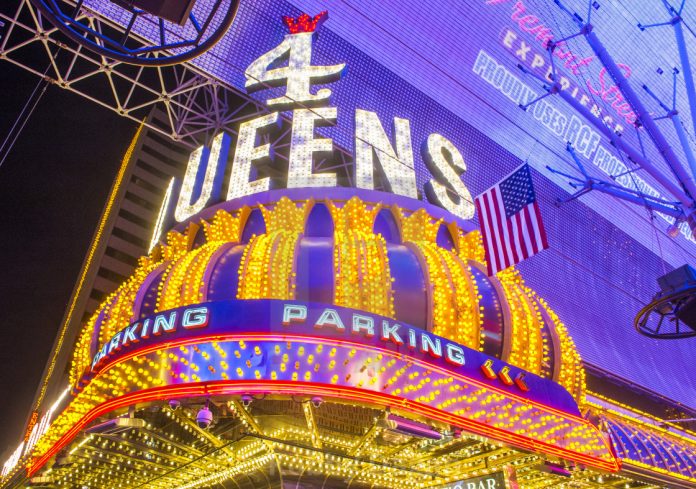 After casinos reopened with a new set of mask rules, some people still didn’t get the memo. One man who refused to wear a mask was cuffed and removed from the 4 Queens casino in Downtown Las Vegas.

No Mask, No Dice!

Large public gatherings are still a hotbed for breeding coronavirus, and the newly reopened Las Vegas casinos have issued mask rules as part of the ‘new normal.’ However, some people believe their personal freedoms trump safety rules, as one man in the 4 Queens casino mistakenly thought.

But as the unmasked man soon found out, you do not mess with Vegas security. Video circulated on the internet shows an unidentified man with no mask wearing glasses, a beard, shorts, and t-shirt, being restrained by four casino security guards. He was reportedly asked to leave for violating the Las Vegas mask law which makes it mandatory for all people to wear masks in public spaces. He is seen resisting security guards, who then restrain him, cuff him, and escort him out of the casino.

And this is not the first time a man was ejected for not wearing a mask in a casino. 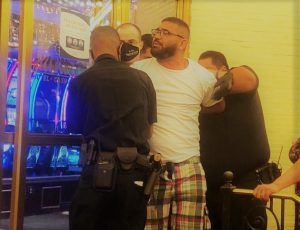 The man being escorted from the premises was caught on video resisting security personnel, swearing at them, and saying “Are you serious?” to them. At one point, bystanders tried to get involved by asking the bouncers to leave the man alone. One man who appeared to be inebriated shouted at the guards to let the man loose, and that he was “his cousin.” The shouting man was also not wearing a mask.

Guards appearing in the video all wore face masks, but several onlookers caught on the video can be clearly seen with masks under their chins. As the mask debate draws lines in the sand over public safety vs. personal freedom, there is one rule you can’t get around: if you’re caught engaging in any kind of undesirable behavior in a casino, you will be removed. By force if necessary.

Gone are the days of well-dressed casino thugs dragging drunken gamblers caught cheating to a backroom beatdown. In the age of viral video, everything is caught on camera these days. And in the latest casino ejection video, the guards were appealing to the man to leave, gently restraining him when he refused, and finally cuffing him. After the man was restrained, it was easier for guards to escort him outside, where they reportedly turned him over to the police.

Nevada casinos reopened on June 4, but after a sudden spike in the number of coronavirus cases, Nevada Gov. Steve Sisolak tightened the rules for public safety on June 26. Masks are now required in all casinos and other indoor public spaces. Only those with medical breathing issues or certain disabilities are exempt from the Nevada mask rules. The number of COVID-19 cases has exceeded 52,000 in Nevada alone, with a death toll of 850.