The Wampanoag Tribe, which originally populated the island, hopes this will give it the economic boost it needs. 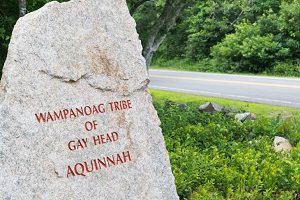 It is not known how long the Wampanoags have been in Massachusetts, but it is estimated the tribe had been in the area for thousands of years. The tribe was present when the Pilgrims arrived in the New World and made the first contact with them when they settled in Plymouth. However, the colonists brought disease with them, and this cut the tribe’s number in half. Some doctors have speculated the disease was smallpox. Others stated it was most likely a bacterium that causes Weil’s Syndrome.

In addition, when the Wampanoag’s went to war with the colonists during King Phillip’s War (1675-1676), half the remaining tribe was killed. Other members of the tribe were enslaved and sent to work in plantations further south or in the Caribbean. There were very few Wampanoags left by the 18th century. What was left gathered in two areas: Gay’s Head, which is now called Aquinnah, and Mashpee on Cape Cod.

Because the tribe is allowed to build casinos under federal and not state law, the Wampanoags were looking for a partner to help them build one. They decided to use Global Gaming Solutions, which is owned by the Chickasaw Nation in Oklahoma. The tribe is looking to build a facility that houses a variety of slots, which are legal under federal law.

The agreement took a considerable amount of time and several court challenges, both from the state of Massachusetts as well as residents on Martha’s Vineyard. They believe that the casino would ruin the beach cottage aesthetic. However, federal courts have stated that the tribe has the right to build a casino.

Global Gaming Solutions was formed by the Chickasaw tribe in 2008. The company has opened and operated more than 30 casinos across the United States and placed and managed more than 50,000 electronic games in casinos and racetracks. The company has become an expert at building casinos and racetracks. It became owners of Remington Park and invested $15 million in the racetrack and the casino, which is located in Oklahoma City. The racetrack and casino have been setting attendance records for several years. It racetracks see 2 million visitors yearly.

Originally one of the Five Civilized Tribes of the Eastern area of the United States, the Chickasaws were spread across Alabama, Tennessee, and Mississippi. They were forced to relocate to Oklahoma during the infamous Trail of Tears in the 1830s. The nation has spread its influence into businesses, such as Global Gaming Solutions, in order to create revenue for tribal operations and tribal service to its community.

The Wampanoag tribe has been campaigning for a casino for some time. The level of pushback against the tribe has been severe at times. That area of Massachusetts has been considered a tourist destination for the rich for decades. It has carefully cultivated the image of cottage tourism for the wealthy. There are manicured houses and niche shops that see hundreds of thousands of tourists each year. The residents of the island are afraid their way of life would change if a casino were allowed.

However, it has been the tribe members’ position that they have the right to use their part of the island as they see fit. That means they want a gaming establishment, which has proven successful for other Native Americans in the United States.