Cathy Judd-Stein is currently the deputy chief legal counsel to the Republican Governor since 2015, and will be taking the place of former chairman Stephen Crosby, after stepping down from his position in September. Since his resignation, the Gaming Commission has been managed with only 4 members; Commissioner Gayle Cameron, a former high-ranking officer in the New Jersey State Police, was selected as interim chair by the other commissioners whilst Judd-Stein waits to take over.

Crosby stood down from Chairman, after bias concerns regarding the state’s enquiry into Wynn Resorts. And although the casino giant are looking to expand and open up a new gambling establishment in Everett later in the year, an investigation is currently underway into the resort’s founder and former CEO Stephen Wynn – after facing accusations over sexual misconduct allegations, with one of the cases resulting in a $7.5 million settlement to one of his accusers.

Allegedly, this information was kept hidden from investigators, which had it been known prior – would have seen them revise the decision to freely award an additional license for the pre-construction of their new Boston casino, as well as carry out more profound background checks.

Consequently these allegations have stalled the commission’s report, which was expected to be completed and published last summer, however; Stephen Wynn also filed his own lawsuit against state regulators in a desperate effort to keep the details of the report away from the public, pushing the investigation back further.

Since 2000, Cathy Judd-Stein has played a key role in every administration in 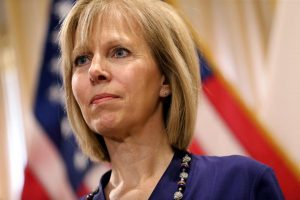 Massachusetts, and has been also proved an invaluable member of staff to the general counsel of the state treasury, as well as director of policy for the state lottery. She has also worked as a personal legal advisor to Governor Paul Cellucci, Jane Swift, Mitt Romney and Deval Patrick.

During a brief press conference inside Baker’s office on Tuesday she said “I am very pleased that as chair of the Massachusetts Gaming Commission I will continue to work at the intersection of complex, important, public and private sector issues. I accept the challenge of working hard every day to try to get the job done right and as my role shifts from advisor to chair, I am honored to continue serving the public and the interests of this great commonwealth.”

Governor Baker praised Judd-Stein for her “legal expertise, precision and impeccable worth ethic” during the conference yesterday, and described her as someone who is fair, thoughtful, diligent and not afraid to make tough decisions, even though much of her work revolves around large and complicated issues.

“Cathy has built an impressive legal career over the last several decades providing sound guidance on complicated legal matters involving state law and public policy,” Baker said. “She is highly regarded not only here on Beacon Hill, but throughout the legal community for her expertise on a wide variety of legal issues, most notably the laws governing the ethics and conduct of public employees. Cathy’s experience in state government and incredible diligence and attention to detail for every task she takes on are some of the many attributes that qualify her to be the Chair of the Gaming Commission.”

Baker was also questioned as to whether candidates put forward for Crosby’s former position, seemed hesitant or put off to accept the role when the Commission’s on-going investigation came to light. He confirmed there were rumored concerns over being appointed even before the election was settled in November.

“The biggest hesitancy we saw pre-dated the election because at that point in time all we were going to be doing was appointing somebody to serve out the rest of Steve Crosby’s term, which I think ends in March. Because of that, we would have been making a decision that we couldn’t guarantee we could make again until after the election. So there were several people who said to us, ‘come talk to us after the election but unless you get re-elected we’re really not all that interested in it.’ Once the election was passed and the voters were kind enough to return the lieutenant governor and me to office, we saw more interest in it.” Baker added.

Crosby’s term will expire in 2 months, and applicants are allegedly awaiting the result to see whether Baker wins a second terms against Democrat Jay Gonzelz.