A regular poker player, who often plays in the World Series of Poker, is suing Caesars Entertainment Corp.

Joseph Stiers says the company cost him a lot of money when it threw him out of a 2017 event. He is suing the company for an undisclosed amount of money, which he says the company owes him. He said it’s not only for ejecting him from the game, but also for keeping his money.

The casino said by not giving the WSOP his real name and city, Stiers disqualified himself from the tournament.

The World Series of Poker

The World Series of Poker is the championship game in a large series of contests played all over the United States. The final championship game is held in Las Vegas. The poker tournament has been played since the 1970s. A casino owner invited the seven top players in the United States to play a game to determine a winner. While the top prize back then was in the five-figure range, now it is in the millions of dollars.

Stiers is a professional poker player who often plays tournaments in casinos in the Washington, D.C., area. In 2017, he says Caesars Entertainment ejected him from a tournament at the Rio Convention Center in Las Vegas. It had a $10,000 buy-in and he had a large stack of $630,000 in chips. In his lawsuit, he states that he was in the top nine in chips when he left the tournament for a scheduled dinner break. At the time he left the convention center, Las Vegas police, with the help of Caesars’ personnel, arrested him. The tournament disqualified him from the event. Caesars Entertainment barred him from all of its properties after a 2015 card-counting incident. That meant he would be unable to play in this event or any other future events at a Caesars’ casino.

In 2015, Stiers said the Caesars’ Horseshoe Casino in Maryland barred him because the casino suspected he was card counting in blackjack. The casino stated it, in fact, ejected Stiers multiple times for card counting. Horseshoe Casino took his $350 at the time of the card-counting incident. Gaming regulators said the casino had to refund it, however. It was the company’s position it informed Stiers of his banishment from all of its properties. 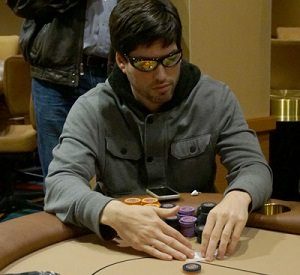 This isn’t the first time Stiers has played in the World Series of Poker. However, 2017 was the first time the company caught him using his “fake” name. Stiers stated in his lawsuit that he had been playing in the WSOP for years without incident. He came in 640th place in 2016, and that brought him an $18,000 payday.

However, the casino states that, previously, Stiers used combinations of his first, middle, and last names to play in the WSOP. He never used his actual name again. He also changed the name of the town he lived in to Washington, D.C. It is Stiers’ position that the tournament didn’t have a problem taking his money when it confiscated it.

He figured his losses during the tournaments in the last four years to be more than $200,000. Caesars only had a problem with him when there was the possibility of him winning the $8 million jackpot. He also could have won more than $150,000 in chips, which sat on the table.

The company counters because Stiers used a false name and was caught, he had to immediately forfeit all the money. He is not eligible for a refund of any of it.

Stiers says the ejection has cost him his livelihood and is suing for damages.