The MGM Springfield opened its doors last weekend to fanfare, concerts, and VIP gatherings. The casino wanted to ensure its opening was a big deal since it hopes the event would translate into big dollars, not just for Massachusetts, but also for the surrounding area.

From the beginning, the builders and creators of the MGM Casino in Springfield intended it to make a huge splash on the New England scene and to become a regional destination. It is hoped that the casino, with its luxurious rooms and top-of-the-line offerings, will draw between 5 and 6 million visitors a year.

The cost to construct the casino was approximately $960 million, which makes it one of the most expensive casinos ever built in the Northeast. Is has 125,000 square feet of gaming space and contains a spa, concert venues, luxurious hotel rooms, restaurants, and nightspots. The gaming floor includes slot machines, table games, and high-roller tables. It is hoped the casino will be able to compete directly with other casinos in the area. There are Native American casinos that are 30 miles south in Hartford, which is the capital of Connecticut. In fact, the casino is offering bus service from Hartford to Springfield every day for $20. Customers can take advantage of special previews and discounts at the MGM Springfield. 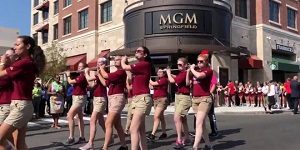 Opening weekend celebrations at the casino included a parade down the street, concerts by different artists, including the legendary Stevie Wonder. The Dropkick Murphys, a Celtic punk band that is based in Quincy, Mass., also performed on opening weekend. Casino players signed up for rewards programs to receive extra points, freebies, and raffles.

Customers were also able to shop in the shopping area within the casino’s property. Indian Motorcycle, Hannoush Jewelers, and Kringle Candle have shops there, and there will be more stores soon. Visitors who had children enjoyed Topgolf Swing Suite, where people can practice their swings, or play in the Tap Arcade and Bowling. The casino planned beer nights and spa relaxation and wellness seminars.

In addition to its current offerings, MGM plans to eventually offer online gaming and sports betting in the Springfield area. At this time, neither online gaming or sportsbooks are currently legal in Massachusetts. However, there are plans to discuss these issues when the General Court’s legislative session begins in January.

MGM is going to need a lot of tools to stay competitive in the New England market, which has grown increasingly larger since the 1990s. Currently, the New England area has eight casinos. A ninth casino is set to open by the end of 2018 or the beginning of 2019. The market for gambling alone in the New England area is worth approximately $2.7 billion, according to experts. Additional revenue, such as entertainment, food, and drink, is not counted in the overall total. The additional revenue from dining and concerts, which MGM sees as important in a competitive market, is another reason it wanted to pull out all the stops for its grand opening.

The casino has future plans for the area as well. The casino, as well as the city government, expects to have a redevelopment plan for the area. The downtown area of Springfield has suffered from economic deprivation. The casino is hoping to be the anchor in a revitalized area of new stores and shops, as well as multifamily and multipurpose housing developments. With luck and continued draws from crowds looking to go to the casino, the city of Springfield is looking toward the future.