After a series of false starts, delays, and a big veto last year, Michigan stands poised to finally legalize sports betting and online gambling. The Michigan Senate Regulatory Reform Committee recently approved gambling legislation for the senate floor, to be followed by the House of Representatives.

Michigan Governor Gretchen Whitmer stated her intention to sign both bills once they pass her desk. Even though previous attempts at passing a gambling bill were passed around like a hot potato – then dropped – both bills are expected to pass unopposed this time around. If so, many people in Michigan will have a Merry Christmas indeed.

If the politicians in the Michigan State government are a good bunch of boys and girls this year, Casino Claus will rain tons of presents on them and their constituents – in the form of legal gambling in all its glory. And getting a sportsbook before March Madness would be a slam dunk.

A year of compromises and debates among tribal and commercial casino operators stalled the gambling bill, and Snyder’s veto was the kiss of death for the legislation.

While previous attempts at legalizing gambling in Michigan failed to launch, a compromise on license fees and tax fees was finally reached. Online gambling operators would be expected to pay a tiered tax rate to the 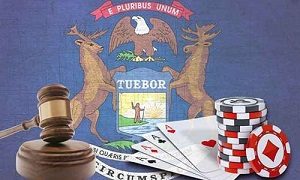 The state gaming license fees for both online and sports gambling stand at $50,000 for the application, $100k for the initial fee, and annual renewal fees of $50k.

One detail of the casino bill is the special tax percentage which will go to fund important state programs. Much of the tax revenue will go toward the School Aid Fund for K-12 schools in Michigan. There’s also $4 million per year earmarked for a special firefighter’s fund which compensates firefighters who contract cancer during exposure to smoke and chemicals on the job.

13 U.S. states currently allow sports betting, and 4 states (including Michigan) are in the process of legalizing it.