A shocking turn of events in the UK government happened earlier this month when a prominent sports minister quit. She quit over the delay in changing the betting maximum on betting machines called “the crack cocaine of gambling.” Tracey Couch resigned, citing the inability of the British government to listen to the social welfare needs of the people.

Gambling in the UK

Card games and sports betting have been a part of the United Kingdom for over 150 years. Casinos and slots did not become a part of gambling in the United Kingdom right away. Soldiers coming back from World War II brought the idea of gambling machines to the country. Gambling machines such as roulette, slots, and poker machines, became popular in gambling clubs. At first, gambling clubs were members-only clubs, but gradually, the machines spread to other places. These days, machines can usually be found in the sportsbook clubs throughout the United Kingdom. The machines are called fixed-odds-betting-terminals (FOBTs). 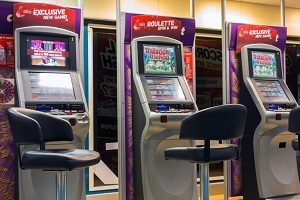 FOBTs allow players to play up to $128 per spin. Clients can choose to play a variety of games, including roulette, historic horse racing, slots, poker, and bingo. Many people like the FOBTs, but social service organizations in the UK and Australia have an issue with them. They note that players do not realize how much money they have actually spent during play. It is the contention of the social service organizations that FOBTs are more addictive than any other form of gambling. Early research into the machines would appear to bear this out.

The UK government has been in discussions for the last year to reduce the amount of money bet per spin. The proposed reduction on the FOBTs is from $128 per spin to $2.59 per spin, which is a considerable reduction. Many people are in favor of the decline in spending; some people, most notably, the gambling companies are opposed.

The Minister of Sport in the UK favored the reduction, saying that it helps customers become responsible gamers. After a lot of debate, the UK also agreed to reduce the amount of money customers could bet per spin. The changes were supposed to take effect in March of 2019.

Since then the discussion has been focused on the amount of revenue lost after the decrease goes into effect. Economists have estimated that British gamblers lose about $2.3 billion a year on FOBTs. The UK sees an additional $260 million from FOBT revenues alone. The British government uses gambling revenue to fund its large social service programs.

It remains to be seen what the British government will do after the minister’s resignation. Many experts think that her resignation will move the adoption of smaller bets of FOBTs that much further away. Some people believe the FOBT discussion is between two groups of people only. It’s between the people who make money off gamblers and those who lose money on the FOBTs. There is increasing pressure in Britain to do something about this issue. However, many people in the UK are not sure what that “something” is. Some believe people should be left alone to gamble—or not gamble—as they see fit. Others think that the use of FOBTs is damaging to the very fabric of British society.