MGM Resorts International has scored another coup in the sportsbook game with the endorsement of Major League Baseball. The MLB and MGM have agreed to gambling rights in the US and in Japan as well. With this agreement, MGM has become the official sponsor of the MLB, the NBA/WNBA and the NHL. This gives MGM sponsorship of three out of the five major sports leagues in the United States. The only league not to sign with MGM is the National Football League, which has so far allowed individual teams to decide for themselves what (if any) sponsorship they will have.

Concern at the MLB

The Tarnished History of the MLB

Major League Baseball has been plagued with two large scandals during its history. The first scandal came during the 1919 World Series. Eight members of the Chicago White Sox (afterward known as the Black Sox) were accused of cheating on baseball. They were banned permanently by the league for taking a bribe to throw the final game of the World Series against the Cincinnati Reds. While later research has noted that most likely not all eight players accused were in on the deal, the players were banned for life.

Interestingly, the Cincinnati Reds were involved in the second notorious scandal. After the Black Sox scandal, the MLB passed a rule (Rule 21) which stated that players, umpires, and officials of any baseball club or organization was forbidden to bet on baseball. This rule was in effect even if the person bet on a different team other than the one they played on or were a part of the game.

It was the violation of Rule 21 that landed Pete Rose in trouble with the MLB. The investigation of one of the greatest baseball players in the history of the sport led investigators to ban Rose for life. Investigators found that Rose bet on baseball, including the team he managed. The Reds fired Rose, and he was also banned for life.

The Deal with MGM 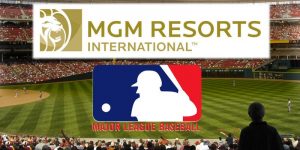 According to the terms of the agreement, MGM will be able to promote itself with teams and the MLB network. In addition, MGM will be able to set up shop at stadiums and MGM properties that promote baseball as well as demonstrating baseball technique. The company is planning to launch small pop-up sites to offer pitching techniques, batting practice, base running practice and practice with other fundamentals of the game.

MGM will also be able to run commercials on the MLB network and brand itself as the MLB’s authorized gaming company. In addition to the network, MGM can promote itself on the MLB’s At Batt app. They will be represented at major events in the league, such as the All-Star Game and the playoffs. Expect to see the MGM logo in the Division Series, the League Championships, and the World Series.