Garber states during a Q&A session before D.C. United hosted Atlanta United:  “I’ve been to a lot of games in England. I’ve never really objected to the fact that somebody would come into the owner’s box and take a bet on a game.”

The commissioner states that it is essential for people to be responsible for gambling. He also acknowledged that gambling could not be avoided for the most part. Garber said, “If people are going to do it, you might as well manage it, organize it. You might as well generate tax revenue for it and find ways that the league could use it as a marketing tool to have people engages more with our players and our clubs.”

Garber also asserted that he thinks the value of authorized betting will bring soccer fans closer to the sport and appeal to a bigger audience. “At the end of the day, the most important thing for Major League Soccer as it relates to the potential of legalized sports betting is not necessarily revenue-driven,” Garber explained. “It’s how do we engage more and more fans to participate, to get closer to our teams, to participate more deeply in our games.”

During the Q&A, Garber also talked about the report stating that a gaming company will possibly purchase the naming rights to the Harrison, New Jersey Red Bull Arena. Garber noted that if a gaming company names one of the NSL stadiums, he would be all for it. Garber added: “We’re in the process of getting close to a major league-wide sponsorship with a respected gaming company, and I’m very supportive of that as have the other leagues.”

Garber also pointed out that each state will likely have a different timeline for sponsorship. “It’s an evolving process,” he said. I think we have to see how it plays out state by state, but once the government says its okay, we’re certainly not going to do anything other than support it.” 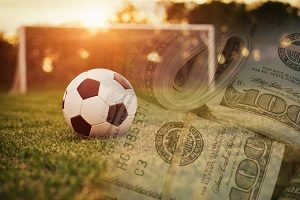 Gambling on soccer is slightly different from betting on US mainstream sports. There are several ways to bet a side and total in soccer games; these include backing the double chance and three-way money lines.

It is important for first time and experienced bettors to familiarize themselves with betting on soccer – the world’s most popular sport.

People all over the world bet on soccer, and there are several ways to wager on an individual game. There is also a variety of competitions with different rules, so it is important to be informed about the game before placing a bet.

There are three choices when wagering on the three-way money line:

Moneyline results are determined solely on 90 minutes of play, which is called regular time. Regular time includes stoppage time at the discretion of the referee and injuries, but does not include penalty shootouts and over time.

For instance, when Argentina faced off against Germany in the World Cup Final in 2014, the closing three-way money line was:

The two-way money line is another way to bet on a soccer game and is offered in two ways:

Double Chance and Draw No Bet. Both are graded solely on 90 minutes of play.

Double Chance means you are wagering on a particular team to win/draw or betting on either side to win. The three possible results are:

Team a wins or draws

Team B wins or draws

Team A wins, or Team B wins