Jacob Burritt, 28, was convicted and sentenced to 40 years in prison for attempting to rob the Magic Diamond Casino in Bozeman, Montana, armed with a fake Moltov cocktail and a head full of meth.

All is not well up in Big Sky Country. In a state famous for its bucolic, pastoral prairies and mountainous skyline, something sinister is afoot. One would think that it would be peaceful in a place with only seven people per square mile and a population of just over a million in the entire state. Famous as an Old West preserve and a retirement ranch for Hollywood actors going out to pasture, Montana has a darker side: methamphetamines.

Maybe the same great open space that provides peace for some people is just plain boring for others. This might be why there are over 1,400 licensed gambling establishments in the state. Casinos = excitement. But for 28-year-old Jacob Burritt, he decided to take excitement to the next level by walking into the Magic Diamond Casino in Bozeman with a mock-Molotov cocktail and a robbery plan.

Or maybe the meth decided for him. The ‘Molotov’ was merely a bottle of cologne with a flaming wick attached to the top, and in his methed-up state, Burritt thought it would be a good idea to rob the joint.

The apple doesn’t fall far from the tree up in Big Sky Country. Jacob Burritt’s father, Michael Howard Burritt, tried to rob a woman at knifepoint outside a casino. The attempted carjacking failed when the woman opened the driver’s side door and screamed for help. Papa Burritt fled the scene, but was later arrested and charged with carjacking, kidnapping, assault with a deadly weapon, and armed robbery. 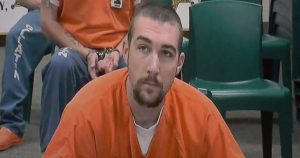 According to Jacob Burritt’s ex-wife, he had “wanted to rob a casino in a similar fashion as his father had robbed a casino,” she told police. Papa Burritt was trying to create a diversion with the carjacking, and his real target was the Chumash Casino Resort in Santa Ynez, California.

In Montana, Jacob Burritt tried to report a fake shooting at a mall by telling Petco employees to call 911. He planned to divert police attention while he robbed the Magic Diamond Casino. Unfortunately for him, when he demanded money and threw the cologne ‘Molotov’ at a casino counter, it caught fire and caused $1,500 worth of damage. Nobody was injured, but the bomb squad was called in to to ‘defuse’ the situation.

Police tracked Burritt down after he fled the scene and found meth in his car. He was arrested and pleaded guilty to lesser charges and received a jail sentence of 40 years.