Looking for economic alternatives to its country’s economy, the Myanmar government has decided to consider the possibility of allowing more gaming into the country. However, while the economy of Myanmar may get a boost, gaming enthusiasts in the country will not be allowed to gamble in the proposed casinos. The nation has many gambling fans and there are illegal games going on in the cities and towns in the rural part of the country.

The History of Casinos in Myanmar

Currently, there are four legal casinos in the country. The most well-known is the Andaman Club Resort and Casino on Thahtay Kyun, which is an island accessible by ferry. The entire island is used by the resort for its guests. Another island resort takes up most of another island, as well as 50 bamboo huts on the west side. Treasure Island, which is off Kawthaung, has 10 buildings on the resort property. Allure Resort is in the town of Tachileik, which is on the border between Myanmar and Thailand. Allure has a 90-room resort hotel, as well as a casino.

Finally, Regina Resort Casino is also located in the border town of Tachileik. It includes the casino, two hotels, two restaurants, and a golf course. All of the casinos offer slot machines, baccarat, blackjack, and roulette, as well as varieties of poker games.

The Problem with Gaming’s Future

Myanmar is ideally situated for gaming. It sits between two gaming giants — China and India. The tropical climate is beautiful and it lasts nearly year-round. You would think this means that the country would be the perfect place for a gambling empire. However, that is not the case.

First, there is Myanmar’s history. The country has a long history of military rule. Even though the military is nominally not in charge, the shaky nature of the country’s democracy and human rights record make some companies shy away from it. In addition, the laws that govern gambling in the country have not been changed since 1986, which means the laws are not prepared for the constant movement in gaming technology. 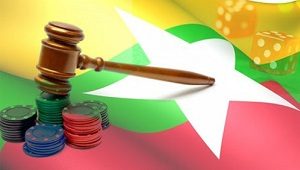 The proposed piece of legislation would replace the law that was passed in 1986. It would allow casinos to operate more games, and bring the country up to speed regarding online gaming and mobile gaming. However, citizens of Myanmar would still not be allowed to gamble in casinos in their own country. Government officials have said that the 1986 law is out of date, especially with regard to the penalties for gaming. They welcome the changes in the law and are hopeful the country will receive the tax money it needs. Lawmakers are also aware that gambling would be even more lucrative if the country’s citizens could gamble. However, other government officials argue that gambling harms the moral fiber of citizens in the country.

There is a hope that with Myanmar’s gradual move toward democracy that casinos will someday be open to its citizens. There is also a hope that there could be the potential for the development of new casinos, which would bring much-needed jobs to the country.

Myanmar’s citizens are very familiar with gaming. Many citizens gamble in small illegal gaming operations, as well as offshore gaming online for gamblers. Some officials have said that if casinos were legalized for the population, citizens could enjoy their gambling. It would also increase the revenue that would flow into the government’s coffers. If the country allows casinos to be legal for its citizens, it would also lessen the effects of illegal gaming on its citizens, such as theft and fraud.