Both the Catawba Indian Nation and North Carolina’s Cherokee tribe are at loggerheads this week, after a disagreement over gambling turf and jurisdiction of state boundaries.

According to the Catawba, who own the rights to a 700-acre reservation in upstate South Carolina, they argue that they have been unable to conduct any kind of gambling operations because of their opposition up north; of which the operators own 2 full-fledged casinos already.

Even though a 1993 federal law promised that the Catawba’s Chief, Bill Harris, would see the tribe gain their own foot in the door, efforts for erecting a casino since then have continuously failed. As a result, the Catawba Nation is now looking to focus on building a casino in North Carolina, where they say they have a historical claim to the land.

The site is located in the Charlotte suburb of Kings Mountain, approximately 56km northwest of the Catawba reservation. 6 years ago, the Catawba Nation submitted a request to the Department of Interior for building a casino there, but the state’s governor at the time, Pat McCrory, along with 100 legislators quickly dismissed the idea.

During a committee hearing to discuss the bill last month, a member of the Interior Department’s Indian Affairs Division, John Tahsuda, said it was “clear that the benefits that Congress intended for the tribe have not been realized” [agreement made between the tribe and federal government in 1993], while the Senate counteracted with “I’m from South Carolina. Nobody, nobody objects to the Catawba having land in North Carolina and in establishing a gambling operation as long as it’s consistent with the law.”

Officials north of the border are said to feel differently about the situation. Gov. Roy Cooper also cited his concerns over the bill at the hearing; stemming from how gambling would be regulated, whether or not the tribe would be able to negotiate the class of games, and if North Carolina would actually receive any of the revenue associated with it.

The principal chief of the Cherokee Eastern Band, Richard Sneed pointed out how the senators’ bill could have “devastating” effects on the tribe for his region; somewhere poverty was once rampant. He also expressed his worries over how a Catawba-owned casino could easily lure visitors away from both sides of the state. Particularly those who want to play games like roulette, blackjack or slots. 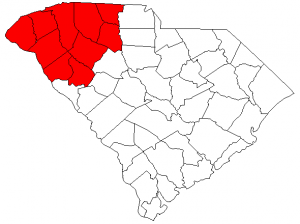 An old federal agreement maps out which tribe has the ball in their court. It shows that the Catawba have no jurisdiction or territorial rights to any land in North Carolina after the mid-1700s.

“The historical evidence is on the side of the Cherokees on this one,” Sneed said. But Harris says the site is well within the boundaries of the tribe, just 13km away from the land in northern South Carolina where the Catawbas helped battle and defeat the British during the 1780 Revolutionary War.

As it stands, the Cherokee tribe, along with North Carolina’s state Senate leader Phil Berger and 38 members of his party, have requested the U.S. Senate of Indian Affairs committee to reject the bill. Something which Harris is certainly not pleased about.