The state of North Carolina has prohibited poker for 12 years. Now, fish games are the new gaming trend in the state. Arcade operators who offer fish games assert they are following North Carolina law because the funds a person can win are based on skill, not luck. However, state officials have a different opinion.

More about the Raid 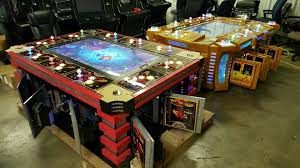 Agents from the State Bureau of Investigation entered the arcade in Asheboro with the search warrants. The raid was the second crackdown in recent weeks at gaming establishments that are expanding across North Carolina.

A law enforcement officer stood guard outside the Lucky Day Skill Games and Fish Tables. When customers tried to enter the business, they were told the establishment was closed.

The police inside the business interviewed people and began reviewing several fish tables and computer-based games.

The raid started at 2 pm. By 3 pm, the SBI had not announced charges or arrests.

The surprise raid was the latest in an ongoing battle over whether video game arcades with “skill games” are in keeping with North Carolina gambling laws.

Police and sheriff’s offices across the state complain that arcades are hotbeds for crime because of their late-night hours and the fact that arcades have large sums of cash on hand.

The recent raid and arrests will likely draw legal scrutiny from the arcade owners and their attorneys. The arcade owners maintain that video games are classified as games of skill due to a loophole in North Carolina law.

Across the state, multi-player table and sweepstakes games called “Fish Games” have become increasingly popular in the last year. The arcades are often open 24 hours and provide customers with free food and, in some cases, just $1 to start gaming.

Earlier in 2019, the Charlotte Observer investigated fish game arcades by talking with arcade owners and an attorney for the arcade industry. The owners and lawyer state that the allegations of unlawful gaming happening in the arcade are unfounded.

Fish Games In Other States

In many other states, fish games have been effectively shut down after forensic analysis showed the game’s outcome was primarily based on a person’s luck.

The skill vs. chance debate has long been one for North Carolina courts to decide.

Some legislators in the state say they think criminal penalties should be harsher in North Carolina.

State Senator Andy Wells ( R ) Hickory, states that police officers in small towns where there are several arcades find it challenging to put a dent in operations. In August, Wells told the Observer “It’s kinda like counting the mushrooms in the rain. By the time you count ‘em 10 percent more have come up.”

Authorities made nine arrests on Nov. 5 in Anson County, according to the SBI.

The gambling laws of North Carolina can be found in the state’s constitution. However, Chapter 18C of the General Statutes provides some exceptions. There are lawful raffles in the state; however, people who publish accounts of the lottery, whether or not the lotteries took place in North Carolina, could be charged with a Class 2 misdemeanor. The report of the lottery includes the prizes offered from the lottery or the area and methods used for drawing tickets to determine lottery winners.

“Except as provided in Chapter 18C of the General Statutes or in connection with a lawful raffle as provided in Part 2 of this Article, if any person shall sell, barter or otherwise dispose of any lottery ticket or order for any number of shares in any lottery, or shall in anywise be concerned in such lottery, by acting as an agent in the State for or on behalf of any such lottery, to be drawn or paid either out of or within the State, such person shall be guilty of a Class 2 misdemeanor. “