Casino revenue drives more than 30% of Nevada’s economy, which has suffered during pandemic lockdowns. Gov. Steve Sisolak warns that Nevada needs to diversify its economy and not rely so heavily on casinos.

Nevada’s unemployment rate rose to over 30% after pandemic lockdowns of casinos began last March. Once casinos reopened at 25% capacity by government mandate, unemployment numbers improved slightly. But Nevada unemployment is still over 10%, and something needs to be done about it. 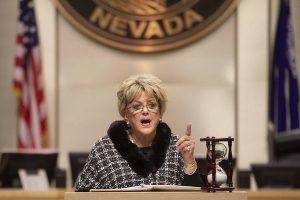 If the pandemic has taught Nevada anything, it’s that diversity is essential. Casinos are a face-to-face experience, hosted by thousands of dedicated hospitality staff. Unfortunately, crowded megaresorts are super spreader spaces to a virus.

The governor’s need to address public safety concerns is often met with harsh criticism from casino cities like Las Vegas, where more than 50% of revenue comes from the hospitality and convention sector. Las Vegas Mayor Carolyn Goodman called the governor a dictator for his lockdown mandate.

Nevada’s neighbor, California, is a global GDP juggernaut due to its agriculture, tech sector, and entertainment industries (to name a few). But Nevada’s economy has always heavily relied on the hospitality sector, and now that needs to change.

Tesla built its Gigafactory in Northern Nevada near Reno. It employed 7,000 workers in Washoe County to manufacture batteries and electric vehicle components. After the Tesla factory opened, Washoe County’s dependence on the hospitality sector went from 30% down to 15%.

But Las Vegas is in the southern part of Nevada in Clark County, which still relies heavily on hospitality for its bottom line. The casino and convention industries are a multi-billion-dollar boon for Las Vegas, but the pandemic lockdowns proved just how vulnerable the city has become.

Economic diversification has been slow, especially in Clark County. Several years ago, another electrical company named Faraday Future planned to build a $1.3 billion electrical vehicle plant in Las Vegas. But they abandoned the plans and left Vegas without the expected 4,000 new jobs.

While the rest of the world has embraced global trade, most of America still doesn’t manufacture much. The service, hospitality, financial, and entertainment sectors are clustered around powerhouse cities like Los Angeles, San Francisco, New York, and others.

But if Nevada wants life beyond the casino, it needs to double down on its plans for economic diversity before it goes bust.