A natural gas explosion at the University of Nevada, Reno, left 1,300 students without accommodation for the upcoming school year. Fortunately for the students, they are getting a major room upgrade in a Reno casino owned by Eldorado Resorts.

Normally, only a VIP gambler gets a casino hotel room upgrade, but in a magnanimous gesture from Eldorado Resorts, 1,300 Nevada University students left homeless after a gas explosion will now reside in a casino hotel tower of their own.

The offer of accommodation comes at a price of $21.7 million to lease the premises for the coming school year. The per-room rates will cost the students about the same as the damaged on-campus dorms, around $5,600 per year for a double room. School officials have stated that their insurance will cover the costs of the move.

The students will occupy the entire west tower of Circus Circus, in a non-gambling part of the resort. Each student will have a separate key card to access the non-casino entrances, as well as access to the hotel-casino parking garages. Those who don’t drive will get to use a shuttle bus to and from the University campus, which is a half-mile from the casino.

Other perks for the displaced students include 24-hour security staff, live-in faculty staff, and student resident directors. A campus police station will also open on the premises. The newly-renovated hotel tower will also convert several spaces into student lounges, study spaces, and laundry facilities, just like in an actual campus dormitory.

In order to make the students even more at home, the casino-hotel tower will be renamed Wolf Pack Tower after the school’s sports team nickname.

A natural gas fire ignited gas lines in Argenta and Nye Halls on the University campus on July 5, resulting in explosions and minor injuries. The explosions injured 6 students and 2 firefighters, but no fatalities were reported.

A gas technician arrived at the dorms in order to fix a problem with a boiler. Authorities have not yet determined how the gas ignited, but a gas line in the faulty boiler started leaking, which led to a small explosion. State Fire Marshal Bart Chambers said that natural gas started leaking from a feeder line during the repairs of the boiler in the basement of Argenta Hall.

The initial small explosion was extinguished by sprinkler systems, but Marshal Chambers said it was unclear how the second explosion was ignited. The second larger explosion blew out windows in Argenta Hall before spreading to neighboring Nye Hall, which also sustained damage.
Both student residence halls have been closed for safety reasons while the fire department investigates, and the buildings will remain closed for at least another school year. 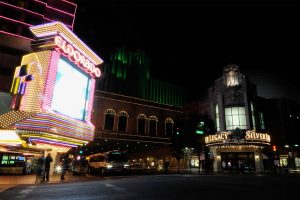 In an unusual end to the tragic story, Eldorado Resorts stepped in to offer housing for the unfortunate students. Starting a new school year is always stressful for students, and an exploding dormitory certainly didn’t let the students sleep any easier.

“The university community is fortunate that our longtime community partner Eldorado Resorts understands what the needs of our program are and has agreed to work with us on transitioning their property into a residence space where our students will live, study and thrive,” Johnson said.

While the Circus Circus Wolf Pack Tower welcomes the displaced students with open arms, some details still need to be worked out.
“My main concern would be definitely food,” Michicich said. “Because I still need to eat.”

Maybe the hotel needs to give the students access to the all-you-can-eat buffet banquet hall as well.