On Friday, the Buffalo Bills announced that they have made a sponsorship agreement with one of the best gaming firms around. This move is expected to set up a trend among the teams in the National Football League to work with various systems.

A New Era at the New Era Field 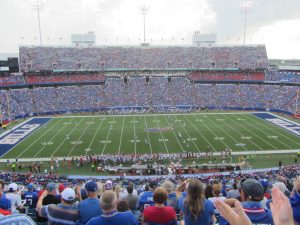 It is literally a new era in the historic New Era Field after Buffalo Bills made an announcement that it would work with Seneca Resorts and Casino. This would give it an opportunity to operate as the official team for the National Football League. On top of that, Seneca Resorts & Casino will work as the official casino of the Buffalo Bills. This is according to a statement that was provided by the Pegula Sports & Entertainment, which is the ownership group of the team. Pegula Sports and Entertainment is based in Niagara Falls and still owns three other resorts and casinos based in the western area of New York.

As part of this great sponsorship, these two firms are coming up to give away a pair of season ticket for 2020. That is not all; they are also giving away a brand new motor coach. Pegula Sports and Entertainment has also announced that it will obtain naming rights to the radio broadcast studio that has its main head offices at the headquarters of the team. According to Melissa Free, the Seneca Gaming Corp’s senior vice president, this partnership will bring even more opportunities for both on and off field plays.

Barely a month ago, had the Seneca Nation stated that it has an intention to provide sports betting at some of its leading venues. The operators of the tribal casino are only allowed to offer sports betting services in New York. This enables operations at its four state-licensed casinos in the city (New York). On the other hand, the Oneida Nation introduced sportsbooks at its main casinos in New York. The betting operations are managed by a company known as Scientific Games. Just last year, the team owners at NFL came to an agreement to allow various outlets to merchandise partnerships with casinos. This deal would also include the naming rights. However, now, casinos are not allowed to promote, directly their sportsbooks as part of their major arrangement.

The Bad State of Affairs

Even though the Seneca Nation has come to an agreement of a single New York-based institution, it has not done the same with the other. It is unfortunate to note that the lack of such agreement could threaten the ability of the tribe to continue providing sports betting services. About two years ago, the leaders of Seneca Nation stopped transferring 25% of its slot machine revenues. They argued that while the compact that existed between the states that ended in a year earlier was later renewed, it did not include the sharing provision of the revenue.

The Responsibility to Make Payments

According to the arbitrators in April, the leaders of Seneca were still in charge of making payments with the nation. In fact, over a quarter-billion were in arrears. Apart from the state losing out, the local communities that had depended in its main shares and profits had nothing to take home. The relationship that exists between the state and the tribe has grown to be very rocky in the past couple of days. This led to the deterioration of a 3-mile stretch of the Interstate 90, located in the southern part of Buffalo. According to the Governor of New York, the state will repair the stretch of highway once the Seneca leaders get their punishment.