Kentucky Governor Andy Beshear has been in office only two months, but the Democrat is already fighting for a change in state laws regarding gambling. He defeated his Republican predecessor, anti-gambling Governor Matt Bevin last November, and now Beshear is calling on lawmakers to pass an online gambling bill.

As an employee pension budget crisis looms large over Kentucky, the neighboring states of Ohio and Indiana are raking in hundreds of millions of dollars in gambling revenue from legal gambling business. And the tax and licensing fees go directly into the state coffers to cover budget deficits. And Governor Beshear wants Kentucky to get a piece of the gambling action.

“We have sources of revenue here in Kentucky that we have not authorized,” Beshear said. “That if you drive just a mile over the river, Ohio and then Indiana are bringing in hundreds of millions of dollars a year through casino gaming that Kentucky simply doesn’t get. We’ve got up to $500 million of potential revenue out there where all we have to do is say Ohio is doing it; Indiana is doing it. It’s time that Kentucky does it.” 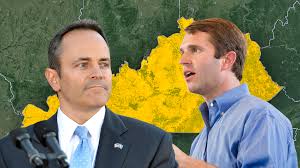 The former governor made audacious claims to the media to bolster his anti-gambling stance, claiming that “every night…somebody takes their life in a casino,” he said. The American Gaming Association said former Governor Bevin’s claims were “patently false.”

The new governor’s hopes for legalizing online gambling in Kentucky are pinned to a bill called HB 137. It has already passed the House Licensing, Occupations and Administrative Committee with unanimous support. Now the House Rules Committee must decide if the bill is ready for a House vote.

While last year’s political landscape was hostile toward gambling in Kentucky, with the right amount of support for the new governor, online gambling may finally become legal in Kentucky.