The news was first reported on Twitter by NOLA Ready, the City of New Orleans’ Emergency Preparedness Campaign, managed by the Office of Homeland Security & Emergency Preparedness. The tweet reported that “The NOLAFireDept, NewOrleansEMS & NOPDNews are responding to a partial structure collapse at Canal & N. Rampart. This is an active scene. Please avoid the area & listen to public safety officials.”

A crane was quickly dispatched to the scene to help stabilize the portion of the building still standing and prevent further damage and injuries. Search and rescue crews, along with trained dogs, worked for hours to rescue two workers trapped under the debris, although there were delays caused while the structure was being reinforced and secured to prevent further injuries. The search was suspended Saturday evening, but it continued the next day as more rescue teams arrived. 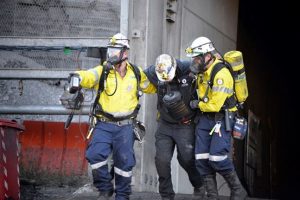 Fire Chief Timothy McConnell held a press conference Saturday afternoon to share further information, as the teams kept working on finding the two missing workers. He told reporters that even though the top eight floors of the building had collapsed, they were hopeful the workers could be found and rescued on time. More than 100 construction workers were on the site at the time of the collapse, though most managed to evacuate the building with no injuries. 18 people were immediately transported to area hospitals for treatment, and most were discharged within hours.

By Sunday evening, the body of one of the missing workers had been recovered, but there was still one person who remained unaccounted for. A third worker who had initially been declared missing was later located at a local hospital, where he was treated for minor injuries.

The collapse caused no further injuries or damages to pedestrians or motorists.

The Hard Rock Hotel construction site is located on the corner of North Rampart and Cala streets, right next to the historic French Quarter. The development, still in the early construction steps, would eventually feature both condo apartments and a 350-room hotel, as well as a pool and additional areas for meeting and entertainment. The former Woolworth Department Store occupied the space until it was demolished in 2015, and the land was quickly sold because of its excellent location and easy access to downtown New Orleans.

As of Sunday evening, there was no obvious reason or explanation as to what had caused the collapse, and officials said an investigation would start as soon as everybody was safe and the site was secured. However, authorities warn that the building is considered unstable, and there are no guarantees at the moment that a second collapse can be avoided. One of the major concerns is the construction crane on site, which could potentially collapse onto the street or against nearby buildings.

Until things are completely under control, NOLA Ready is declaring the road in the area around the building closed to traffic, and several buildings around the construction site have been evacuated. Residents are advised that heavy traffic is to be expected on Monday and perhaps throughout the week. Using alternative routes or choosing public transportation instead of driving to ease the traffic rush is encouraged.

New Orleans Mayor LaToya Cantrell issued a statement over the weekend expressing her condolences for the tragedy and ensuring residents that authorities were working non-stop to secure the place. “We are doing everything we can to support the families impacted as rescue efforts continue,” she added.