While the amount of money spent by Americans on illegal sports gambling varies, experts have estimated that the revenues from illegal gaming are between $100 and $250 billion per year. This seems unbelievable until one considers that it is estimated that $10 billion are illegally wagered on the NCAA basketball tournament alone. A recent report from the Nielsen Corporation, which monitors television viewing patterns in the United States and Western Europe, estimated that the National Football League could rake in over $2 billion from sports gambling. To be sure, this amount depends on how many states allow sports gambling to happen in their jurisdictions.

Current State of Sports Gaming in the United States 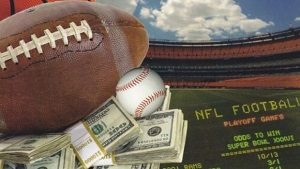 When the Supreme Court overturned anti-sports gaming legislation from the 1990s, it spelled a monumental shift in sports betting. The court ruled that states could decide for themselves whether or not to allow gambling, rather than there being one federal law governing all the states. In addition, the court ruled that the sports gaming exception in Nevada was not constitutional for the other 49 states. Since the Supreme Court ruled that the law was unconstitutional, several states have joined Nevada in allowing single-sport betting, either at casinos (such as in New Jersey, Mississippi and Pennsylvania) or at racetracks (such as Delaware and Pennsylvania). It is expected that at least six more states will legalize sports gambling by 2020.

The Revenue Projections for the NFL

The Nielsen Company has stated that the NFL will see a boost in media rights because of increased interest in the game due to gambling. The boost in media rights includes sponsorship fees by betting operators of NFL teams, as well as fans who want to purchase official data from the NFL, which would entail a fee. The company has estimated that legalization in sports betting would increase fees from media rights to more than 18 percent, sponsorship fees would rise by 7 percent, and ticket sales will increase by around 6 percent.

These fees do not include a percentage of the revenues from betting which would be shared by the gaming companies with the NFL, and then distributed among the teams. While some teams have stated they are adamantly opposed to the NFL getting fees from gaming sponsors, many sports leagues, such as the Premier League in the United Kingdom, receive fees from teams, usually couched as the team fee or the league fee.

Other Sources of Team Revenue

Nielsen also estimates that sports gamers and sports gaming companies will want to obtain the most recent and current team data as possible, especially for live, in-game betting. The NFL could rake in an  estimated $30 million in additional league data fees. League data would include player changes or moves, as well as injury reports, and team practice reports. While the NFL Players Association has balked at the availability of team data, in countries where sports betting is legal, many betting companies get their data directly from the teams, and the team data is as current as possible.

While this is an overall picture of the potential for the league it is not a prediction. The company warns that it will be several months before there is accurate data on the number of states likely to legalize sports gambling. While some researchers have stated they expect 20 states will have allowed sports gaming by 2022, other researchers have stated they expect sports gambling to be legal in 40 states in the next five years. The amount of money the NFL will receive is dependent on the number of states who choose to legalize sports gambling.