Station Casino has unveiled its plans to renovate the Palms Casino Resort in Las Vegas. The renovation efforts, which will cost a staggering $620 million, were announced during the Palms’ marketing campaign, From Dust to Gold.

Destruction is in progress

The Palms said the marketing campaign was in line with its vision to usher in a new era by destroying the old one. The campaign was announced during an event on Thursday, and its motto is progress is to destroy.

The Palms was acquired by Station Casino for $312 million in 2016. Although the property has been a source of solid returns for its parent company, Red Rock Resort, it has started to show signs of its age. This prompted the owners to undertake one of the largest renovation projects that any property in Las Vegas had ever seen.

Some of the changes that will take place include adding a fully digital marquee, a new steakhouse and bar, an authentic Hong Kong-themed restaurant, and a cocktail lounge. The Apex Social Club will replace the Ghostbar. It will also include the Pearl Concert Theater and the Palms’ gaming floor redesign. In addition, there will be a new and exclusive gaming lounge and a 29,000-square-foot nightclub and 73,000-square-foot pool club will be unveiled next spring. The casino floor will also be expanded to accommodate an extra 300 slot machines and 16 gaming tables.

Phase One is expected to be done by the fall and will include 60 rooms. Phases Two and Three will be completed by the second and fourth quarters next year, respectively.

Inclusive of the renovations is the expansion of the existing parking garage. Two more levels will be added, and that means there will be 573 more parking spaces. The plans for the new parking structure have already been approved by the Clark County Zoning Commission.

The parking garage, which currently has five levels, will be upgraded to a seven-leveled structure. It will stand at 85 feet and have a total of 3,100 parking spots. There will also be a connector that will link the Palms Place to the garage and the casino, guaranteeing a person will not have to walk outside to get to either place.

The renovations taking place at the Palms have caused a decline in first-quarter revenue for the Red Rock Resort. It had reported revenue of up to $421 million in the three months leading to March 31. This is a 1.1 percent decline compared with the revenue collected for the same period last year. However, it has experienced a 2.9 percent increase in its adjusted earnings to $140 million. Its net income has also been on an upturn, registering a $36.7 million increase to $82.1 million. A large chunk of this gain has been attributed to interest rates and tax one-offs.

Revenues of other Red Rock properties that have not been disrupted by these renovation efforts have helped to support the construction at the Palms.

A new era for Las Vegas 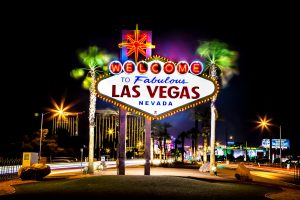 There are a lot of changes taking place in Las Vegas this year. Among the many makeovers is the MGM Resorts International’s reconstruction of the formerly known Monte Carlo into the Park MGM and other surrounding properties, including The Park, T-Mobile arena, and Toshiba Plaza.

There will also be a zip line on The Strip that will be able to hold up to 10 people. The attraction, introduced by Fly LINQ, will give thrill-seekers the opportunity to zip line more than 1,000 above the LINQ promenade. Lady Gaga is also set for a two-year residency at the Park Theater.