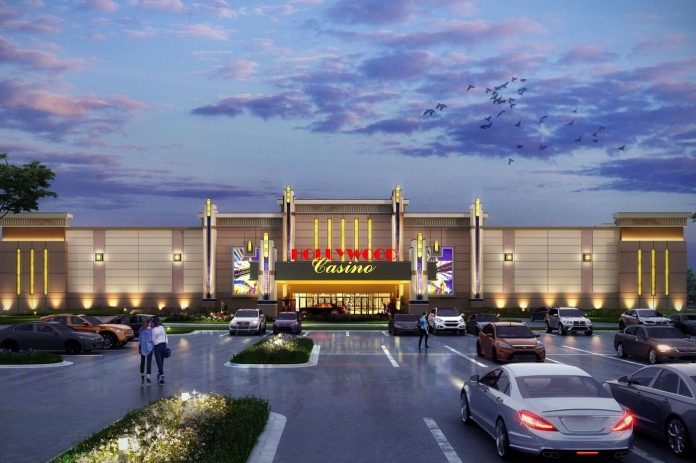 Penn National Gaming held a public hearing in conjunction with the Gaming Control Board at the end of February. The meeting was to discuss the proposal of a new satellite casino to be constructed in the region.

Penn National is the current operator of the existing Hollywood Casino at the Penn National Racecourse, and is now looking to push for the development of an additional gambling facility, which will be situated in Morgantown, Berk County, and could be up and running towards the end of 2020.

It is estimated that $111 million dollars will be put towards the project, to accommodate an 85,900 sq. ft. gaming area made up of 750 slot machines, 30 table games, a sportsbook, restaurant, bar, and nightclub.

It’s not just the two major gaming entities who attended the hearing either. Also present for the discussion were more than 100 Berks County residents, who were reported to be more than displeased by the idea of a satellite gambling hub in their neighborhood – particularly as it is considered a highly-religious and conservatively-minded community.

Many of those residents even wore custom badges which displayed the word “CasiNO!” on them, expressing their vexation towards the proposal plans. One resident called Michael King, even went to the trouble of acquiring more than 1,000 signatures to protest the gambling venue being erected in their town.

Pennlive.com also reported that Richard McGarvey, a spokesman for the Pennsylvania Gaming Control Board, averred that the public hearing was a necessary part of the process in applying for a casino license. Conflicting opinions commonly occur during these events, but McGarvey stated that the opposing attendees were far more organized in comparison to what the board have seen with other casino proposal meetings in the past.

The main concerns were said to be over an increase in gambling addiction, sex trafficking and tourism as well as substance abuse. Long-standing resident and citizen of Morgantown Tad Allen believed that the new casino would create an endless amount of problems for families. During the hearing he said “If I was looking for a place to live today, I would not bring my family to Morgantown. This is a small community and the size of this casino is going to have significant impacts. It will bring in crime, it will impact the families with addiction and divorce. I am certainly in favor of economic growth, but not when it’s done on the backs of people who can least afford it.”

All issues and worries aside, there are said to be a few residents who are in favor of the mini casino establishment. They dubbed themselves the Supporters of Hollywood Casino Morgantown and produced another petition containing 156 signatures, which they presented at the hearing.

CEO of Greater Reading Chamber Alliance, Randy Peers, said that he was all for the casino development to take place in the county, while Berks commissioner Kevin S. Barnhardt agreed that the casino would highly benefit the community.

Site Location and Further Discussion to be Held

At the moment, the proposed location has been set on 36-acres of land at the front of the Pennsylvania Turnpike, Route 10 and Interstate 176. The site was initially developed as part of a mixed shopping complex, but its intended use never came to fruition.

If the casino is approved, Penn National estimates that $94.3 million will be pumped into the local economy as a result – generating 311 permanent and full-time career opportunities, according to financial consulting firm ESI.

In addition to the recent public hearing, another one is due to be held at a later date in Harrisburg. There, both Penn National spokespersons and representatives from the Gaming Control Board will congregate to debate the discussion further, while giving members the opportunity to ask questions before a vote is called to decide on the fate of the proposed casino.