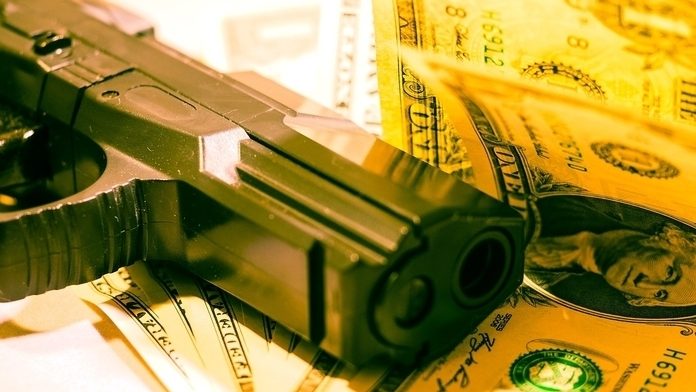 An armed robber made away with cash after jumping over the counter at the SLS Hotel and Casino Las Vegas. This is the fourth casino to be robbed in a week.

Las Vegas Police Lt. Randy Sutton said the reason why thieves are so bold has to do with the amount of cash the casinos contain, which is typically much more than a bank.

“It is a risk versus rewards situation,” said Sutton. “Casinos have more cash than a bank.”

He added that there is also very little security, thus allowing robbers to see them as easy targets.

“These guys that are going in do not feel there are going to be consequences,” said Sutton. “They don’t feel they are going to face down armed security.”

A String of Robberies in One Week

There were three other robberies that occurred in the same week. An incident at the New York-New York hotel happened after a robber entered the casino and was seen on surveillance cameras wearing black shades and a black cap. The incident occurred around 1 a.m. The robber approached the cash cage with a handgun. After taking an unknown amount cash, he then exited and fled the scene after making his way across a bridge and into a cab.

While no footage was released of the SLS robbery, according to casino.org, authorities say the thief could be seen running past slot machines dressed in a hoodie shortly before leaving the establishment. As for the incidents, although they are extremely alarming, it is a relief that no casino-goers were harmed or hurt during any of the robberies. Still, customers are making sure to stay alert and on the lookout for any other potential issues. However, some customers were not shy to express their concerns over casino security. Leonard Roberts, an SLS visitor, told KSNV he feels something should be done to enhance security.

“Nobody should be able to rob a casino,” said Roberts.

“They need to do something about their security or something.”

He adds it’s always best to keep your eyes peeled because you just never know what could happen.

“I think it’s pretty much a lot of that going on out here,” says Roberts. “You have to keep your eyes open.”

It sounds ideal for casinos to beef up security. However, some feel this may only end badly if there is a dangerous situation. Mehmet Erdem, a University of Las Vegas professor, says guards did not go after the robber after the SLS incident, and this has been common practice. He also says that casinos must be very careful when deciding to place armed security on the gaming floor because this could potentially deter customers.

“If you have armed security personnel, I’m looking at my risk management. How much money am I loosing from heists versus responsibility?” said Erdem. He then recalled an incident from 2000 where two guards were severely injured from stray bullets shot by a suspect as they attempted to subdue him in the Harrah’s casino.

“Do you want to create incidents like that?” Erdem said. “Unless you have Navy SEALs for your security personnel, and they are like Chuck Norris and Steven Seagal and can take out anybody, I think it is a huge risk to have security personnel be armed at least in a visible setting.”

Authorities also do not feel there is a connection between any of the occurrences. The only connection is that they have all taken place within the same week. The amount of money stolen was not released because police feel the amount would only fuel other robbers into acting.