The Southeast Conference continues to dominate. The number one and number two teams in the country are Georgia and Alabama. In the conference, these teams are No. 2 and No. 1, respectively. Three of the top five teams (and four of the top 10) in the nation are in the SEC. Week five offers the second week of play within the conference. It boasts some interesting matchups, and some potential upsets as well.

Florida is coming off a disappointing first-week loss to Kentucky in Gainesville. It also had two more promising wins against Colorado State and Tennessee. The Gator’s offense has recovered from its first loss, and, last week, the quarterback had a nice game. The Gator’s defense has played well, too, after the first games. However, the Gators are about to face the buzz saw that is Mississippi State. The Gators have had suspensions and the team’s quarterback and running back have not been playing effectively. Look to Mississippi State to win, but covering the spread will be difficult. 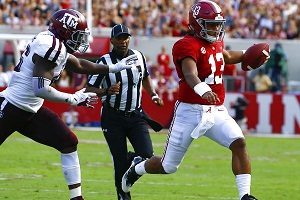 Alabama is the best team in the country right now, and Louisiana-Lafayette is not. That’s all you really need to know. Alabama has one of the best defenses in the country. Only Auburn’s defensive line, and, perhaps, LSU’s secondary, can match Alabama’s speed on defense. So far, Alabama has begun the season by beating the crap out of lesser teams. However, with that being said, this is a huge spread, and it may be a little ambitious. Therefore, taking the spread for Alabama would seem to be a safe bet.

So, the Bulldogs of Georgia were coming off a huge victory over South Carolina. That seemed to prove the team’s destiny was to win the East. However, neither the offense nor the defense really stepped up against Missouri. And, while they covered the spread, it was a lot closer than the score revealed. Both the offense and defense got royally chewed out by Kirby Smart after the game last week. However mediocre the team played, it can’t hold a candle to the train wreck that is the Volunteers’ team. One player quit in the middle of the game in the third quarter and walked off the field. That should tell you how woeful things have gotten in Knoxville. Pick Georgia to cover this spread.

Texas A&M has not had the luck of the schedule on its side. It has lost to two top five teams in Clemson and Alabama. However, the team should get a victory this week. It will play Arkansas. This team may not win another game all year – and it still has Tulsa on its schedule. Mond is an efficient quarterback, and the defense is solid. Pick Texas A&M to cover the spread.

LSU may be one of the biggest surprises in the SEC this year. The team projected the defense would be strong, and it is. It is the offense, with a new, poised quarterback, that has been a surprise. The Tigers already have a victory over two Top 25 teams, including Auburn, and a victory over Miami. This victory was more of an annihilation of the Hurricanes. In the meantime, the offense of Ole Miss isn’t horrible, but its defense is. Last week, the offense gave up 17 points to Kent State—and Kent State isn’t that good. The offense will be no match for LSU’s speed. And, the defense is woefully underprepared for a mobile, calm quarterback. This quarterback has an offensive line that has, so far, been doing a good job of protecting him. LSU should easily beat the spread.