A man is currently in custody at the Missoula Police Department after receiving multiple charges following a robbery at the Nickel Ante Casino April 13.

The man who was identified by the Missoula Police Department as Stephen James Antil, 56, is being charged with not only robbery but also criminal endangerment and attempted murder.

According to Police Sgt. Mike Herbert, the alleged robber pointed a gun at a casino employee and demanded money. Witnesses said that Antil allegedly fired numerous rounds as he was being followed by people from the casino. No one was reported injured in the shooting.

The suspect later admitted to the police department via court documents that he fired his gun.

Antil, who was arraigned in the Missoula Justice Court on April 16, is also facing two felony counts in connection with the robbery. The initial bail for the criminal endangerment charge has been set at $50,000, while a $250,0000 bail was set by Deputy County Attorney Mark Handelman for the attempted homicide charge.

Not the First Time

Unlike other counties, Missoula County, which is located in western Montana, has seen numerous casino robberies in the past few years.

In July 2015, a pair of unknown suspects, presumed to be a male and female, robbed a casino on the 3700 block of Brooks Street.

In May 2016, two casinos in Missoula were robbed in a span of one week. One of those included the Lucky Lil’s Casino, which is situated in North Reserve Street, a few blocks from the Nickel Ante Casino. In another incident, the Deano Casino on West Harrier Drive was also robbed by a pair of armed suspects.

The two men who robbed the Deano Casino were later identified as Thomas Earl Dempsey and Nick West. They were charged with robbery and aggravated kidnapping and are currently serving their terms in the Missoula County Jail.

And, if that was not enough, there was another robbery last March. Jordan Nall, 25, robbed One Eyed Jack’s Casino, which is on the 2700 block of South Reserve Street.

Recent data shows that Missoula has a crime index rate of 3 and a crime rate of 59.02 percent. In addition, more than 4,000 crimes are committed annually in the county, with at least 3,000 of those relating to property crimes.

Furthermore, Missoula has also been dubbed by MSN.com as the most dangerous city in the state of Montana. It has a crime rate of at least 425 incidents of violent crimes for every 100,000 residents who live in the area. 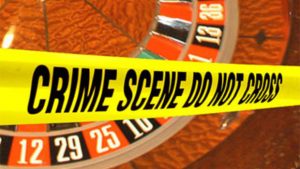 Missoula, and the state of Montana, in general, has an appealing and thought-provoking history of gambling. It started with illegal wagerings, such as underground bingo and pioneer saloon games, before being officially legalized by the state government in the 1970s.