A small village in Illinois recently voted 4-3 to legalize video gambling for at least two years. Many people in Campton Hills are celebrating the promises of more money flowing into the village. However, other people are angry about the trustees’ vote. Fifty-four percent of villagers voted to continue the ban on video gambling in a nonbinding resolution earlier in the month. 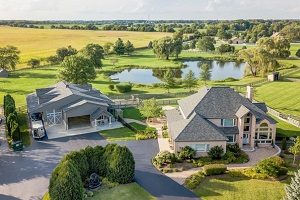 Established in 2007, Campton Hills is a village located in the far western suburbs of Chicago. It includes three smaller townships, and its population is about 11,200 people. The median household income makes the village a good choice for families. However, the demographics of the village indicate that the age group for families is severely underrepresented. In fact, the village has a disproportionate number of adults aged 50 and over.

Even though the village is new, it has already outlined some lofty goals for the area. Campton Hills wants to set aside plenty of green space for recreation and exercise. It also wants to establish a historical museum to discuss the history of the area. In addition, the village hopes to encourage commercial and residential development.

Video gambling terminals (or VGTs) are, in reality, slot machines. Most of the slot machines that businesses are using in Illinois have state-of-the-art graphics and music. They look more like video games than they do the slot machines seen in movies. Illinois law allows establishments with a license to have as many as five VGTs. Most are in businesses, such as truck stops, restaurants, and bars. Some villages allow VGTs in places that are not for entertainment, such as flower shops and convenience stores.

There is a reason towns and villages in Illinois want VGTs. Depending on where they are, slot machines can bring in as much as $50,000 per month or more. The size of the town also seems to help as well. Small towns do not bring in as much revenue as larger towns that have VGTs. The amount of money is in the six figures. And, that is a lot of money for a small town to spend. Businesses that have VGTs are able to expand, renovate, or give employees raises. Statewide, in 2018, the VGT revenue was $1.2 billion.

The Vote and the Repercussions

The trustees of the village were evenly split on the issue to allow VGTs. However, the outgoing president broke the tie to allow the machines for a two-year trial period. The president said he favors a friendly business climate. And, that is the reason he voted to allow them.

However, many villagers are not happy the machines are coming to the area. They said they do not want gambling. The incoming president of the trustees said only three restaurant owners want the VGTs. He also noted video gambling might encourage business owners to use it as a crutch for bad business decisions. In addition, the trustees said they could not vote in favor of a law that a majority of the population opposed.