The state of Illinois is thinking about expanding gambling in order to pay its roads and bridges. Legislators are considering this move rather than using it for education or social programs. Some politicians agree with the idea that increased gambling brings increased revenue for roads and bridges. But, other politicians are against the idea of adding more gambling across the state.

The State of Gambling in Illinois

Illinois allows gambling on riverboat casinos in rivers but not on Lake Michigan. You cannot have a riverboat in a county where the population is more than 3 million. The state allows horse and dog racing and lotteries. Illinois also has video gaming terminals in casinos and some bars. However, in that case, it depends on the county. In the state of Illinois, most of the gambling revenue does not go to the state. Instead, it goes to the individual counties. In most counties, the revenue generated from gambling goes into the general fund of either the county or its townships. Illinois currently has six casinos and three race tracks.

The State of Roads and Bridges in the Land of Lincoln 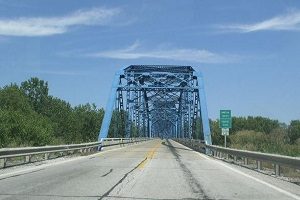 The National Society of Professional Engineers rated the roads and bridges in Illinois a C-. The engineers have stated that Illinois needs $10 billion of work done on bridges alone during the next six years. Currently, the state has only allocated $2.6 billion for bridge work. In addition, the society ranked the roads in Illinois as the third worst in the nation. The state has allocated $1 billion for roads in the next five years, but only a third of that is for roadwork. Clearly, the state needs a different solution for its roads and bridges issues. The state will need to replace many of the bridges because they are in danger of failing.

The state has looked into other possible solutions for its roads and bridges. One suggestion, in addition to gambling, is to have a tax on the number of miles driven by cars per trip. However, that suggestion has proven to be very unpopular. Other Illinois legislators have brought up the idea legalizing sports gaming. The state could take the revenue from sports gaming and use it to repair its roads and bridges.

Many legislators criticized the tax on miles driven because it only affects people who drive cars to work every day. It doesn’t affect people who use public transportation or share rides. The critics have also said that people already pay for roads via their cars through gasoline taxes. Also, for the tax on miles driven to work, each car must have a special device. This has been criticized as being a violation of a person’s privacy.

The legislature has tried to pass different types of gaming before. However, it has been shut down on the notion of increased gaming by more conservative legislators in the south. These legislators feel that there is already enough gambling in the state. However, experts believe that sports gaming revenue alone could bring the state $500 million per year on the low end. It could also bring up to $2 billion on the high end for sports and online gaming tax revenue.

If Illinois passes sports legislation, the sportsbooks could open at the casinos and race tracks within a few weeks. This is very similar to what happened in other states that have already passed sports gaming. Illinois may not like the idea of sports gaming as a way to acquire additional revenue. But, it may be one of the few ways to gather revenue as a pleasure tax without further affecting drivers.