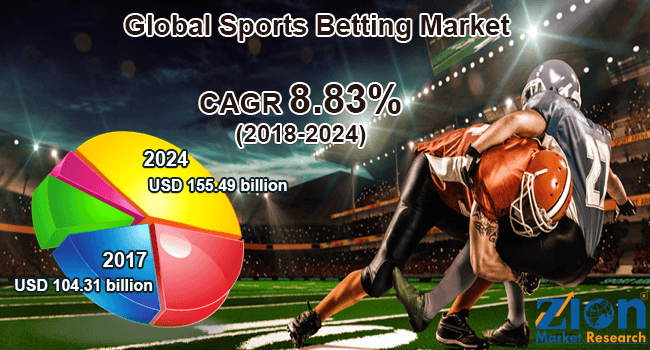 A recent study revealed that the sports betting industry will be worth approximately $155 billion by 2024. This is according to Globe Newswire. In a report from Zion Market Research, sports’ betting is growing in a steady and healthy Compound Annual Growth Rate (CAGR) of about 9% between 2018 and 2024.

In recent years, sports’ betting is making headlines with its playoff as the value of gambling industry escalates. Global Newswire also claimed that a report from Zion Market Research further revealed that sport betting has been rising steadily since 2017 where its value was around $105 billion. Notably, the report covered the sports betting industry on both regional and global scales.

Among some of the covered countries includes Germany, United States, United Kingdom, India, Japan, China, Africa, the Middle East, Brazil, and France. Consequently, a different report by Research firm Technavio is expected over the next five years. According to a report in businesswire.com, there is an expectation that the CAGR will rise to more than 10% from 2019-2023.

The future of gambling is at stake

The report also revealed that countries where the government has lifted prohibitions against gambling on sports experience growth better than others. A perfect example is the U.S. After PASPA- a federal ban that was imposed on the country was abolished by the Supreme Court, the industry has registered a steady growth ever since.

The Zion report also noted that 888 Holdings PLC is one of the key contributors to the rise of the industry’s performance mainly due to its activities in the U.S. What’s more, it recently partnered with numerous companies in the country in an aim to facilitate the sports betting services in the country.

The Zion report also conclusively stated that although many companies allowed sports betting, others, such as Uganda and Albania have banned the activity. According to the report, the move will have negative effects on the sports betting market in the future- on a global scale. However, if legalized in the majority of the countries around the globe, players might enjoy better gaming experiences in the years to come.

Contribution of sports wagering in the digital age

In the current digital age, technological advancements have greatly influenced sports betting. The rise of digital betting platforms on mobile and enhanced platforms has contributed to the drastic changes in sports wagering. Apart from bringing unique sports betting experience that, there is a high chance that the segment will dominate in the future.

Thanks to the increased awareness created by these online platforms, the market is divided into online and offline betting categories. In addition, the report provided statistics stating that global gambling revenue on sports betting equates to about 70%, which is a bigger share as compared to other types of gambling.

Notably, the Zion report contains data about wagering on key sporting events, but European soccer betting is still the sport with the highest number of fans. It also generates the highest betting revenue compared to other games.