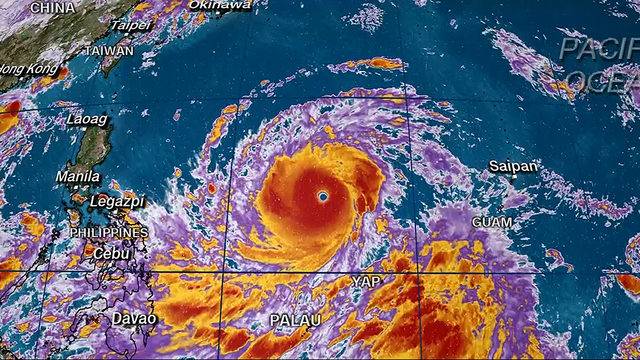 Just one year after the deadly typhoon Hato struck Macau, leaving 12 dead, hundreds injured, cutting off electricity and water supplies and leaving in its wake some $1.42 billion in damages, the city is again in the possible sights of another mega storm.

Super typhoon Mangkhut, with sustained winds of 157 mph, the equivalent of a category 5 Atlantic hurricane, is barrelling past the Philippines toward mainland China and looks set to effect some 43.3 million people according to the Global Disaster Alert and Coordination System, as floods, landslides, huge waves and tidal surge batter local communities.

On its current trajectory, the super typhoon is expected to made landfall somewhere between western Guangdong, home to both Hong Kong and Macau, and eastern Hainan Saturday night or Sunday morning. 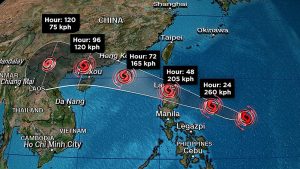 Hong Kong is already preparing for what may well be the most devastating storm the city has ever seen and officials in Macau, accused of unpreparedness when Hato struck last year, have been working overtime to warn residents and shore up the cities flood defences.

Meanwhile, an engineering expert has told the South China Morning Post that the structural integrity of the multi-billion-dollar bridge linking Hong Kong and Macau could be put to the test by the storm.

Hok-yan added, “If the waves are higher than four metres, then there is a chance these protective blocks will be washed away, and very quickly. Depending on the wind direction, the waves could be as high as six metres according to American forecasts. Without the protection of the dolosse, the worst-case scenario would see the undersea tunnel detach from the artificial island and float above the sea, and also the collapse of the island.”

The Hong Kong-Zhuhai-Macau bridge is a lifeline for Macau’s casino industry, bring Chinese players from the mainland straight into the heart of the former Portuguese enclave.

With casino revenues making up 82.9% of Macau’s total revenue and Chinese whales comprising  over 50% of that, damage to the bridge could deal a serious blow to Macau’s money making machine.

The Meteorological and Geophysical Bureau has told Macau News Agency that on the storm’s current trajectory, it is likely that Macau and Hong Kong will see Typhoon Signal no. 8 to no. 10 raised sometime between Saturday night and Sunday morning.

A Typhoon Signal above no. 3, leads to the immediate closure of all government offices, schools and the regions financial markets. Most private sector businesses are also expected to close their doors, sending home all non-essential workers in shifts so as not to overwhelm public transport. All flights in and out of the region will also be cancelled.

What the typhoon means for Macau casino revenues 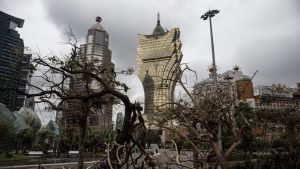 In the aftermath of Typhoon Hato last year, which was so severe as to force China to call out the People’s Liberation Army to help in relief efforts, meteorological officials in the gaming enclave came under fire after sources with knowledge of the city’s storm protection plans said that the delay in issuing effective storm warnings and the lack of preparedness was almost certainly effected by what they called the “casino factor”, the fear that shuttering the city’s mega casinos too soon would dramatically effect revenue.

With some 30 million visitors per year heading to Macau to gamble, gross gambling revenues from the cities 41 casinos last year totalled $33.2 billion, compared to the $6.4 billion generated from gambling in Las Vegas.

According to Macau’s Financial Services Bureau, 82.9% of city’s total revenue comes from gaming and the vast majority of visitors, some 71.5% come from mainland China, with Chinese whales comprising the lion’s share of total casino spending.

August last year saw gross gambling revenue up a solid 20% year-on-year to top $2.8 billion according to the Macau Gaming Inspection and Coordination Bureau, but the total figure could have been far higher were it not for the destruction and disruption caused by typhoon Hato, which forced many hotels and casinos to temporarily suspend their operations due to damage, and cuts to water and power supplies.

A number of brokerage houses have stated that Hato shaved somewhere between several hundred basis points (bps) and 600 bps from year-on-year growth in gross gambling revenue, equalling a loss of somewhere in the ballpark of $170 million as a direct result of the storm.

This year, year-on-year revenues for August rose 17% to top $3.3 billion, Macau’s 25th straight month of gross casino revenue growth. Analysts had forecast a rise from between 12% to 19%.

Even before the impending super typhoon, some analysts had also expressed concern for future growth rates, as China seems to be renewing its efforts in rooting out corruption, leading to a significant decline in high rollers from the mainland visiting the gambling hub.  When Chinese president Xi Jinping first launched its anti-corruption drive in 2012, Macau casino revenues were hit hard, with gross gambling revenues falling for 28 straight months.

Last month, Wynn Resorts posted a dramatic decline in revenues for its first casino due to a decline in the number of Chinese whales visiting the resort on junkets from the mainland.

Analysts from Sanford C. Bernstein Ltd, pointed out that there has been a recent uptick in the number of corruption related prosecutions in China, stating, “The most recent three-month average (April [-end] to July) number of investigations is the highest since the fourth quarter 2015. Any re-emerging anti-corruption campaign would bring headwinds to the VIP sector and high-end premium.”

With super typhoon Mangkut likely to due significant damage and force the enclave’s casinos to close their doors for an unknown period of time, experts have warned that September gross gambling numbers could tumble once again, depending on the degree of destruction.

In the event that the Hong Kong-Macau bridge collapses, the short- and medium-term effects could be decimating for Macau revenue growth.

That, combined with the Chinese government’s continued crackdown on corruption scaring off the whales, may well lead to serious downward revisions in analysts’ expectations.