Gambling is illegal in Georgia and has been for decades. However, that didn’t stop someone from stealing nearly $8,000 in cash from a slot machine at an Atlanta convenience store. Police are still looking for the man who a camera caught surreptitiously stealing the money. While he was quickly taking the money out, another man played a slot machine one chair away. 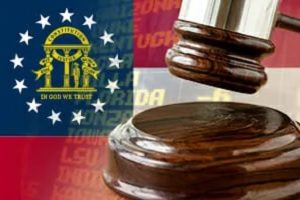 Georgia has some of the most restrictive gambling laws in the nation. The state does not allow any casino gambling. It also prohibits both horse racing and dog racing. Bingo halls are also prohibited. The only form of gambling allowed is through the Georgia Lottery and charitable gambling. Charitable gambling includes raffles. There are only a handful of states that are as restrictive as Georgia. The neighboring states of Alabama and Tennessee are also very restrictive. In fact, the closest casinos to Georgia are in North Carolina and the tribal casinos in Alabama.

While some of the machines look like traditional slots, others look more like modern video games. Players put cash into the machines, but they cannot get cash out. Instead, people can get their winnings in lottery tickets, gasoline, merchandise from the business, and future plays.

Georgia officials have fined businesses that have COAMs for allowing their customers to get cash prizes rather than merchandise. The Georgia Bureau of Investigation raids businesses, such as convenience stores, each year because they hand out cash instead of prizes. Recently, for example, the GBI raided five convenience stores in a county and confiscated hundreds of thousands of dollars. The Georgia Lottery estimates that more than $2 billion a year runs through the COAM slot machines. 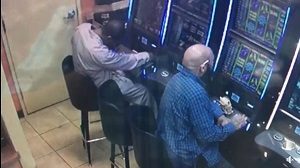 COAMs are supposed to be difficult to break into. However, because they are usually found in the back of a convenience store, people can easily break into them. Would-be thieves try to disable the no-cash pay in the slot in order to extract cash. Nearly all the convenience stores have cameras and mirrors that allow the employees to see the gamblers. But robberies do happen from time to time.

In the case of the latest robbery, the store had cameras and mirrors, but the robbery still happened. It occurred at a Shell station on Campbellton Road in southwest Atlanta. The robbery occurred at 2 a.m. early Saturday morning. A tall, skinny African-American man was gambling with another patron a chair away.

The surveillance camera showed the man playing a while before he broke into the machine and began pulling out money. His fellow player did not seem to notice. In all, the man stole $7,900 from the machine before he pocketed the money and casually walked out. At the time of the robbery, there was only one person working at the station. The clerk was busy cleaning up and helping customers. The Atlanta Police Department has offered a reward for the capture of the robber. So far, the man has remained anonymous. The Georgia Lottery said that robberies from the machines are extremely rare. The lottery corporation also said the newer the machine is, the more difficult it is to break into it.