While gaming has been popular in China for hundreds of years, Mainland China does not allow it. It has been this way since the Communist Revolution, which began after World War II. China allows very little gambling in all of its territories. However, it does allow its citizens to participate in two lotteries. One helps the country pay for the cost of feeding, training, and housing athletes who will compete in the Olympics. The other benefits the social welfare of those who are sick or elderly and can no longer care for themselves.

The only gambling the government allows on the Chinese mainland is the lotteries. The autonomous territory of Hong Kong has limited gaming. The government allows horse racing there. The other autonomous territory, Macau, has been a giant revenue-maker for the Chinese government. Revenue from the casinos in Macau pour into the coffers of the country. With all the benefits casinos and lotteries can bring, it would seem that China could benefit from additional gaming revenue. However, it seems that additional revenue is not what the country wants.

Instead, China has decided to crack down on online gaming, which the country has prohibited. The penalty for operating an online casino, poker den or sportsbook is jail. The government will also confiscate any domains, equipment, and money. 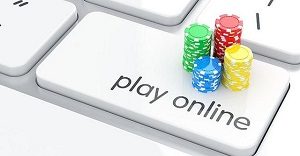 Chinese citizens can gamble online or via a mobile app if the payout is a prize rather than cash. However, the Chinese government figured out that people have been exchanging virtual prizes or virtual currencies. They have taken them off the web to spend or transferred them into bank accounts.

What Happened with Tencent

China notified vendors that they must get rid of all their poker and casino games from Chinese app websites immediately. Initially, Tencent Holdings Ltd. believed it would not have to adhere to the ban. The company said people do not play its poker games for money. They play them for prizes. Tencent had marketed itself as a product of play. The company stated most gamers play their games to practice for larger poker tournaments in Asia, which are very popular.

Tencent made the decision to shut down its poker website in China. It did this despite the amount of money it makes in the country through in-app purchases. Tencent also made money from subscription fees and advertising dollars made from the game.

The problems Tencent has with China have had a chilling effect on other gaming sites, and gamers within the country. The government of China has begun to charge people who were not on the mainland with gambling offenses. Last month, the Chinese government arrested six people from the Philippines and charged them with illegal gaming.