Home » USA Online Casino News » The History of Sports Betting In the US: Why Is It Illegal In So Many Places?

The History of US Sports Gambling 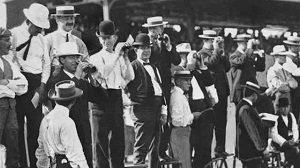 Sports’ gambling has been illegal in most of the US for years. The regulations started at the horse track a few centuries ago.

Before the land that is, America was officially the United States, the first track for horse racing was established in 1665. Before the Revolutionary War, partially funded from lottery revenue, many people who lived in the colonies considered themselves English subjects. Therefore, it makes sense that several goods and practices imported from England. One of these practices was horse racing. The sport dates back to the 12th century, and people have been gambling on racing horses ever since.

Horse racing developed into an organized sport and enterprise in the US by 1868 because of the American Stud Book. The book was published in 1868 and was a catalog featuring all the thoroughbreds in the US. However, by the early 1900s, bookmaking became illegal in the United States, which made horse racing nearly nonexistent.

Cochair of the Herrick Feinstein LLP Sports Law Group Dan Etna told SB Nation: “You start out with a general premise that in most states, gambling of any type was, by legislative pronouncement, deemed to be illegal. Some of this stuff was rather deeply embedded in the states’ DNA if you will. It wasn’t just the law. Like for instance, at one point in time, New York State, its constitution outlawed gambling of any type.”

Pari-mutuel betting became the lifeline for horse race betting and a suitable alternative for gamblers across the country. This type of betting essentially removes betting against “the house” and puts all bets in a pool, so that the stakes work against each other. In the early 1900s, the Kentucky Derby offered betting machines. Gamblers took part in horse race gambling quickly and often preferred it to betting with bookies.

In the early 20th century, racegoers were accustomed to years of speculation with the slates. Bettors preferred to bet the conventional way to prevent being cheated. However, it appears that after two months of using the machines, the public would become comfortable with the devices and bet at the machines as much as in the sportsbooks. The mutuels virtually eliminated talks of dishonest machines; there was gossip that machines made fraudulent bets and this became common gossip among gamblers. The chatter led to the scandals that caused gambling reformers to commit violent acts. The reformers also wanted to restore horse racing to the sport of kings, since it was as an elite activity.

However, outside of horse racing, gambling still didn’t have a positive reputation.

The Perception of Gambling In the US

Gangsters ensured that laws concerning bookmaking, alcohol, and violence would go hand in hand with a public conscience during the Prohibition period. The Black Sox scandal in baseball, where White Sox team members moved to fix the World Series in 1919, only made the perception of gambling worse among non-bettors. This incident became an easy way for decision makers in sports to forbid gambling on integrity grounds. Sports leagues toed the line in this regard for the next 100 years.

Sports betting became legal in the state of Nevada in 1949. However, sportsbooks in Nevada did not make much of a profit, since the federal government took 10 percent of gambling earnings. After this, there were several gambling scandals, including CCNY in 1951, North Carolina and NC State in 1961, Boston College in 1978, and Tulane in 1985, as well as baseball’s Pete Rose scandal. These scandals did not do much to make people more comfortable with sports betting in the US. The scandals also led legislators to introduce new rules to redefine legal gambling, such as the Federal Wire Act of 1961.