Week 2 in the NFL was, to put it mildly, not an easy week to bet on. If you are an NFL fan or a gamer who bets on the NFL, you will agree. The teams that are usually considered locks, such as the New England Patriots, lost. And, the teams most gamers try to stay away from, such as the Chicago Bears, actually won. What is a gambler to do? Here is a look at the worst NFL bets from Week 2, and a look ahead to Week 3 betting. 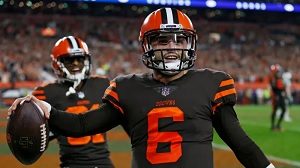 The Cleveland Browns shocked the world on Thursday. The team beat the New York Jets and got its first win in two years. The Browns tasted sweet victory after losing in gut-wrenching fashion to New Orleans, after tying in their first game. While many wagerers are not willing to bet on this team yet, gamers may want to reconsider. It is worth noting that bettors should not overlook the Browns when they play the Raiders in Week 3. The team is 3-0 against the spread. The preliminary line is -5 against the Raiders. But, the line will not settle out until after the Raiders play Sunday. At this moment, however, the Browns are difficult to bet against, especially against the spread.

The Favorites Were Unpredictable

In last week’s 14 games, the favorites were 7-6-1 straight up, but they were only 4-10 against the spread. This led to a bloodbath in gaming. For example, Pittsburgh was the favorite in the game against Kansas City (-5.5). Oddsmakers were considering that Roethlisberger has been solid and the Chiefs quarterback has been untested. But, they didn’t expect Mahomes to throw six touchdown passes after throwing the week before. While Roethlisberger looked decent, Mahomes was unstoppable, and Pittsburgh could not seem to find its vaunted defense anywhere.

Another spot where wagers lost their shirts was on the Indianapolis at Washington game. Washington was the favorite (-3.5). Alex Smith had a good Week 1, and the Redskins were at home. In addition, Indianapolis had proven shaky with Luck under center. He only recently returned to the game after being out for two years with injuries. While Smith didn’t play badly, his defense did, and the Colts came out of D.C. with a win.

Playing the favorites is not usually a bad idea. But, the performance of many of the favorites left a bad taste in the mouths of gamblers. This week will also present a challenge to gamers.

A Look at Week Three

There are several interesting matchups this weekend. First, the Eagles (-6) are favorites against the Colts. However, the line’s strength is going to depend fully on whether Carson Went returns in form for the Eagles. The Eagles defense is still strong, and most pundits expect them to go hard against Andrew Luck. The offensive line, while better than in previous years, still needs work.

The largest spread at the moment is Vikings vs. Bills. The Bills are absolutely woeful, both on offense and on defense. However, the Vikings didn’t exactly set the world on fire last week either, ending in a tie against the Packers. Some sports gurus would argue the Vikings acquitted themselves well against Aaron Rogers. But, in reality, the Vikings had the game won and allowed the Packers to come back. The spread is currently -16.5 for the Vikings. Many people think a wagerer might do well to bet against the spread.

The sportsbooks are also picking the Chiefs, one of the surprise teams of the year, as a seven-point favorite. This appears to be a safe bet. The Chiefs have looked strong on offense, and the team’s opponent (the 49ers) struggled to beat a woeful Lions team.