For years, the US gambling market has been in the doldrums, relatively speaking. Casino revenues have seen only modest increases, as have racetracks across the country where horseracing is allowed. However, the Supreme Court decision on whether or not states should legalize sports betting has changed the American gambling landscape. Sports gambling could increase the gambling market by billions of dollars annually, rivaling the gambling giant across the Pacific; Macau.

Sports gambling has been illegal in the US since 1992 when single-sports betting was prohibited in every state except Nevada. However, with the rise of fantasy sports leagues, states increasingly wanted a share of the sports gambling trade. New Jersey sued the federal government and won the right to have sports betting legalized in their state. A handful of states followed: Delaware, West Virginia, Pennsylvania, and Mississippi have all legalized single sports betting. It is expected that half the states in the country will have legalized sports gambling by the year 2020.

The Role of Sports Gambling in America 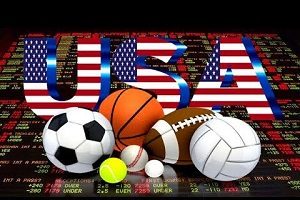 Americans have been betting on sports for hundreds of years, whether legal or illegal. American bets on horseraces have been going on since the colonies began. Even when sports betting was illegal, which started in the 1920s and 1930s with Prohibition, Americans still wagered on sports.

It has been estimated that more Americans place illegal bets on sports than they do legal ones. Illegal sports gambling in America comes in two forms. One is by placing bets in small office pools or through illegal bookmakers to bet on sports teams. The other form is by placing bets illegally through offshore sportsbooks. Either way, Americans are going to gamble on sports, and states are missing out on revenue.

The huge revenue boost that America would get from the legalization of sports gambling would affect sports leagues as well. Economists have estimated that the four professional sports leagues would earn $4.2 billion yearly through legalization. The National Football League, the National Basketball Association, the National Hockey League, and Major League Baseball were against the legalization of gambling. They are warming up to it. The leagues realize that much of the additional revenue would come indirectly through gambling. For example, research indicates that when fans bet on sports, they go to see more games, and buy more tickets. The fans participate more in the games when they have a stake in whether their team wins or loses.

If gambling does rise as much as predicted, it could increase the economies of states that have legalized sports. It would also provide additional state revenue through taxes on sports gaming and winnings. Many states could use the extra money for social programs. In addition, states are increasingly looking at gambling revenue increases as a way to provide more aid for education. When states receive additional revenue through sports gaming, the teams and the citizens within the states could benefit.