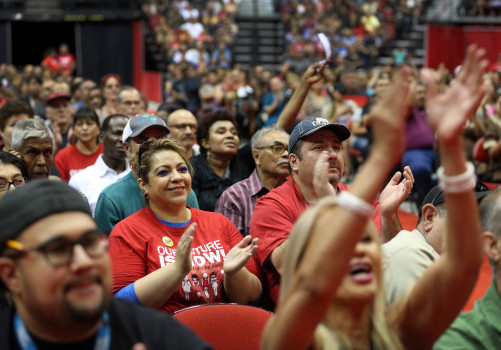 Less than a week before NHL’s largest matchup the Stanley Cup Final is set to begin, union members and workers of the city of Las Vegas, the Entertainment Capital of the World, are expected to organize a mass strike that could include as many as 50,000 workers.

The “walk-out” protest, intended to strike at the heart of the Vegas tourism sector, could negatively affect revenue for the major casinos of the Strip, which are anticipating a flood of hockey fans ready for the Cup.

The city’s professional hockey team, the Las Vegas Golden Knights, is set to go head-to-head against the Washington Capitals, as the home team enters its first Stanley Cup to top off a remarkable inaugural season.

The owners and operators of the hotel-casinos on the Las Vegas Strip, which has more than 90,000 hotel rooms and sees nearly 29 million visitors each year, could lose millions in gambling dollars should the walk-out protest go through. If the casinos fail to ink new five-year contracts with the Culinary Union, which represents 50,000 hospitality workers in Las Vegas, it very well might.

The Culinary Union is a Las Vegas based worker’s union that protects the employment rights of tens of thousands of servers, bartenders, housekeepers, doormen, and cooks working in the area. Its members have threatened to walk out of their jobs as early as June 1. Thirty-four casino-resorts in total would suffer the financial consequences.

The cost to play

The potential for financial loss could be disastrous. For the upcoming Memorial Day weekend alone, the Las Vegas City Council is anticipating over 300,000 visitors, many of whom are coming from California and neighboring states for the holiday.

As far as the strike is concerned, the MGM Resorts International and Caesars Entertainment operate over half of the properties that could be affected. Spokespersons for both companies hope to reach agreements with the Worker’s Union soon.

Anthony Curtis, publisher of the Las Vegas Adviser, has stated that casino operators and board members know that “a full-scale walkout, without a doubt, would hurt business”.

So why are the workers protesting?

The employment contracts of nearly 50,000 individuals are set to expire May 31, and it is unclear whether all of these individuals will see renewed contracts.

More and more casinos are adopting job automation within the city; jobs that were once performed by people have now been replaced by technology. Las Vegas has built its economy on tourism, and hospitality employees in particular tend to be more vulnerable to automation. Leaders of the worker’s union are demanding job security, and that employers offer job training to workers susceptible to automation.

An independent study found that Las Vegas is most at risk for losing jobs to technology within the U.S., due to its reliance on the hospitality industry.

Studies have shown that workers in the hotel and food industry file at least three times more sexual harassment complaints to the Equal Employment Opportunity Commission in comparison to other sectors.

Negotiations between casino operators and union officials began as early as February, but the two parties have failed to reach a mutual agreement. A spokesperson for the MGM stated, “Our resort partners and their union representation have traditionally maintained a good working relationship… We continue to monitor the situation but are not directly involved in negotiations and are respectful of the collective bargaining process.”

The last time the Culinary Union led a strike in Vegas was in 1984. Nearly 15,000 workers walked out of their jobs, and the strike lasted over two months, costing some $75 million in taxable revenue for the city, according to a recently released report. The figure does not include gambling losses, which were estimated in the tens of millions.

The number of tourists expected for June has been estimated at 3.6 million individuals when looking at last year’s average. Hotel occupancy rates are already at 90 percent as summer is the busiest season for Las Vegas.

Only days remain before the strike could take effect, and union officials are still waiting on a positive response from casino employers.