Following a lengthy history of staunch opposition, the state of Virginia seems to be experiencing a shift when it comes to casino-style gambling.

The Pamunkey Indian tribe has recently disclosed its plans to build a $700 million casino and resort in partnership with Yarbrough Capital and is currently eyeing a 600-acre property in New Kent County, located just 30 miles east of Richmond. Soon after, another announcement came on the heels of the Pamunkey project: Chicago-based company Revolutionary Racing has struck a $20 million deal to buy Colonial Downs, a closed down horseracing track located just minutes away.

Gambling laws in the United States have always been notoriously restrictive. Although gambling is legal under federal law, each state controls its own regulations, and most impose heavy restrictions. In fact, Nevada and Louisiana are the only two exceptions that allow casino-style gambling statewide; other states that currently allow casino-style gambling impose restrictions concerning where exactly it can take place: for example, in specific cities, like Atlantic City in New Jersey, on Native American reservations, or exclusively at riverboat casinos.

While the vast majority of states in the U.S. advocate a change in gambling laws, Virginia is one of only ten states that have consistently opposed all forms of gambling. This change in mentality may be a reflection of the changing times.

Perhaps one of the most visible indicators of this change of heart is the MGM Resorts International’s MGM National Harbor in Maryland, which opened just across the river in December of 2016. An estimated 40% of its business is generated by casino goers visiting from Virginia.

While resistance to casino gambling in Virginia hasn’t disappeared entirely, the demand for casinos is difficult to ignore. Virginia Governor Ralph Northam acknowledged this, saying,

“I think there is the potential for it. Obviously, we’re going to take it one step at the time. If that’s something Virginians want to participate in, why not look at doing it here in Virginia, rather than those resources going to other states?”

The origin of the casino project dates all the way back to January 2016, when the Pamunkey tribe finally received federal recognition as an American Indian tribe. This distinction treats a tribe as a domestic dependent nation, affording it legal protection. As a domestic dependent nation, a tribe is also in a unique position to open up casinos as the typical gambling laws don’t apply.

An interesting road bump occurred during this process – back in 2014, the organization Stand Up for California issued a challenge when Pamunkey was awarded federal recognition, halting the process in what could have taken several years to resolve. One of the nonprofit’s primary focuses has been to block the expansion of tribal gaming. Although ultimately unsuccessful, the organization attempted to show that the Pamunkey tribe didn’t fulfill the requirements for federal recognition.

The most interesting part? MGM was a key collaborator in this attempt to intervene and prevent casino competition for their National Harbor, which was just about to open its doors to the public. 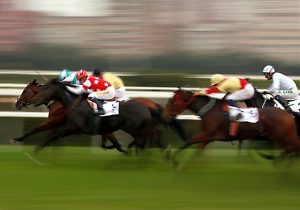 Located between Richmond and Williamsburg, the recently sold Colonial Downs is a racetrack that first opened in September of 1997 and closed in October of 2014. At the height of its success, the track generated $750,000 in yearly revenues.

In another move to support the growth of Virginia’s casino industry, Governor Northam gave his approval to legalize betting on historical horse racing through electronic machines that mimic the slot machine experience, using the results of previous races to generate winning results.

The new bill was passed just last month, which was promptly followed by Revolutionary Racing’s acquisition of Colonial Downs. The company hopes to revitalize the once-thriving horseracing industry, estimating that the track has the potential to generate $41.6 million in yearly revenues.

Colonial Downs is slated to reopen as early as 2019.

The U.S. casino business is an ever changing, ever evolving industry. The demand for casinos isn’t going away anytime soon, and the push to capitalize on it within the state may soon become the dominant view.

However, some critics point out that creating new avenues for gambling may divert activity from charitable gaming opportunities like the Virginia Lottery, which contributes significantly to public education funding.

With the opening of Colonial Downs and the Pamunkey casino anticipated to occur within the next several years, the full effects remain to be seen.