Now, Wynn Resorts is considering going online, and it wants to expand its resources on the Eastern Seaboard.

The online casino market is booming in New Jersey. In fact, the combined monthly revenue total of the online casinos is more than three Atlantic City casinos put together.

Wynn Resorts, the brainchild of gambling genius Steve Wynn, once had properties on the Eastern Seaboard. However, Wynn sold all his interest in gambling and his father’s bingo halls. That money was his stake when he moved to Las Vegas in the late 1960s. Wynn made billions of dollars retooling and redesigning the Las Vegas Strip. He also built some of the city’s most luxurious hotel resorts. Wynn was also one of the first entrepreneurs to see the potential in the Asian market. He was one of the first casino owners to make a deal with the Chinese government to build casinos in Macau. The company now owns three casinos on the peninsula.

However, Steve Wynn is no longer with the company. He resigned as chairman of the board. He also sold all his stocks. His ex-wife is now the largest shareholder. Wynn had no choice but to resign after allegations of sexual assault and sexual harassment surfaced. 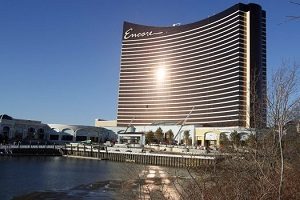 The state of Massachusetts approved Wynn Resorts huge casino in Everett, which is close to Boston. The company expects to open the casino before the July 4th holiday.

Wynn Resorts doesn’t own a casino in New Jersey. New Jersey law requires that online casino platforms have a partnership with an existing casino. Therefore, the company said it will be looking for one. The company will also need to house servers within Atlantic City to be compliant with New Jersey law.

There are a couple of wrinkles to Wynn Resort’s plans for its online gambling platform. First, the casino will have some pretty stiff competition. There may be as many as 25 casinos or sportsbooks online by the time the 2019 NFL season opens. In addition, the federal government and 16 states are currently in court battling over the Federal Wire Act. The government has stated the act makes online gambling illegal. However, states have said the federal government has no right to meddle in their commerce. States say they have the right to conduct online gambling if it’s occurring within their borders.