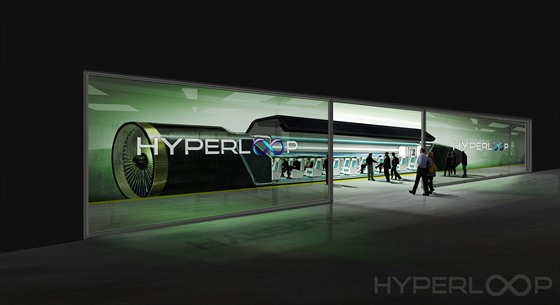 The Hyperloop looks set to be one of the most exciting developments in transportation since the invention of the airplane. The idea is it will be a revolutionary way of traveling between cities at the same speed as going on a flight, but at a much more affordable price. This makes travel within reach for more people, as well as makes getting around the country faster and more convenient than ever. There are two major players vying to be the first to develop this cutting-edge transport system. The big question is: Who will be the winner?

In a race that harkens back to the space race of the 1960s and the early days of space flight, business magnates Richard Branson and Elon Musk have captured the imagination of the world as they attempt to be the first to launch the new train transportation system. Two of the brightest and most innovative minds of our generation are pitting themselves against each other and it is anybody’s guess who will be the victor.

What Is the Hyperloop? 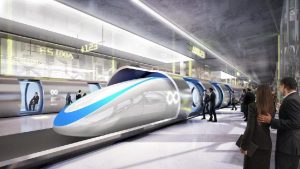 The Hyperloop is designed to be like a train transportation system. However, it operates differently, which is why it is able to move people so quickly. Allowing travelers to get from Los Angeles to San Francisco in less than a half-hour, it couldn’t be a more convenient option for anyone who has to travel for work or for leisure purposes.

So, how does it work? Musk has previously described the concept as being similar to vacuum tube systems that are sometimes found in buildings and that move documents between floors. Essential, it is a train, but Musk himself has called it more like a cross between an air hockey table and the Concorde. Based on the 1970s proposal for a VHST (very high-speed transit) system, which used a transit tube at low pressure, and a train that operates through magnetic levitation, the Hyperloop uses capsules or pods in tunnels, so they can be moved between locations at high speeds.

The Uses for The Hyperloop

At present, the Hyperloop looks set to be a suitable alternative to air travel over short distances. It will be speedier than existing trains and cleaner for the environment than flight. It isn’t about achieving maximum speeds — high G-forces on turns would be uncomfortable for passengers. A top speed of more than 700 mph is likely for journeys. Of course, there are some practical considerations that need to be considered, such as the sensations experienced during deceleration and acceleration on short journeys.

The original concept of the Hyperloop was generated by Musk. However, recently Branson has weighed in, investing in his own version of the project. Both are focusing on the same ideas and the same methods of function. However, each man is taking his own project in his own chosen direction.

How Does It Work? 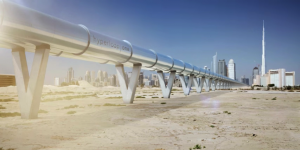 The primary issue experienced when developing any form of moving transport is friction, which is both against the environment and against surfaces. However, Musk’s Hyperloop will not use traditional wheels. Instead, it will use air bearings on pods to allow it to float. Similar to existing maglev systems, it will mean there will be no friction to slow it down, and high speeds will be attained as the pods travel through a low-pressure tube.

The point of having a low-pressure tunnel is to produce lower resistance to the pod’s movement, making energy efficiency possible. While a vacuum would be ideal, the difficulties in making this possible, especially when stations need to be taken into account, make it virtually unachievable. Lowering the air pressure, however, is possible with air pumps. Musk has also suggested solar panels on the tunnel tops could create sufficient energy for powering the entire system.

In Branson’s version, the Virgin Hyperloop One, passive maglev will be used, which means that magnets will be fixed to the trains and they will work with an aluminum track. At present, active maglev systems require powered tracks that have copper coiling, and this can be prohibitively expensive.

Both systems will levitate the pods and move them through the air instead of having to push air before it and drag it behind. The cushion of air sees air being pumped to the back of the pod from its front thanks to suspension cushions. The tunnels will be metal from metal and elevated like an overground system, although it could also work underground, too.

When Will Hyperloop Arrive? 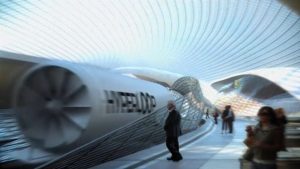 Although Musk has not yet announced a date by which the Hyperloop can be expected to run, SpaceX has created a test track, 1 mile in length, next to its headquarters in California. A trial has already been performed, and it proved to be successful.

Meanwhile, Branson’s Virgin Hyperloop underwent a test in May 2017. It saw a pod being levitated on another Nevada test track for a little more than five seconds. It reached 70 miles per hour. Another trial was held using a passenger pod measuring 8.7 meters in length. It traveled along a test track of 500 meters, reaching 192 mph before stopping safely.

Currently, there is a proposal for a route to be created between Los Angeles and San Francisco – a journey of 354 miles. The cost for construction will be approximately $6 billion for a passenger-only version, or $7.5 billion for a version that could transport vehicles, too.

As for the Virgin Hyperloop One, its chairman and co-founder has stated the company aims to move cargo and passengers in small high-speed pods that could depart as frequently as every 10 seconds by 2020.

Musk has been given government approval to create a Hyperloop that could connect Washington, D.C., Baltimore, Philadelphia, and New York City. Taking just 29 minutes to complete the journey, it would have at least 12 access points through each of the cities by elevator. Musk is currently developing machines that can reinforce and dig tunnels simultaneously and has already finished the first part of a tunnel under Los Angeles.

What Do You Need to Know About Virgin Hyperloop One?

Virgin Hyperloop One admits to taking its inspiration from Musk’s original concept, even though Musk himself is not involved. Again, the system is set to either be in tunnels under the ground or constructed on columns. It would be fully enclosed and autonomous, protected from weather and pilot error, and it would produce no emissions for environmental friendliness. Trains will depart several times a minute, transporting cargo and passengers direct to where they want to go. At present, it is predicted the price of using this system between Los Angeles and San Francisco would be just $30, making travel much cheaper than air transport and a lot more convenient.

Of course, it isn’t just the two giants who are in the Hyperloop race. Maybe the race will be won by one of the outsiders who is also competing to be the first to develop this cutting-edge form of transport. Whatever happens, we can be fairly confident that at some point, a Hyperloop system will be available sooner rather than later.